Overman was fun, entertaining and comedic. Her jokes were quick and she had this amazing talent of reacting quickly to the crowd. A few of her jokes fell flat and the physical comedy didn’t really work, but she had the ability to pick up on it and speedily turn it around. Instead of allowing the joke to fail, she would add in an improvised anecdote which then made the room laugh and kept the humour on track. She had the ability to read the room, work out what was working and what she could do to improve it. It made the show tailored to the crowd and also showed she was able to adapt and was naturally funny without it needing to be scripted.

She noted herself that some jokes just weren’t working and she didn’t know why she kept them in the show, adding perhaps it was because she liked them. This sort of honesty was endearing and quickly warmed the audience to her.

The show was about how she self identifies, mainly as a Dutch woman and who she is beyond that assumptive description. She shared with the audience that she was singled out as a child at school and alienated due to her choice of toy. Whereas other kids had Barbies or pretty toys, she had a doll which was sick and you played doctor to mend her. The doll had a rash on her buttocks and was terminally ill. Now here’s the thing: I had that doll too. Unsurprisingly I was also a weird child who struggled at school.

She also highlights xenophobia, discrimination and prejudice happening to her through presenting parts of the show as xenophobic and stereotypical. She mainly discusses how she didn’t realise that it should ‘matter’ where she’s from and question why it has to represent her; why is that immediately assumed to sum up her personality? It ties in to discussions on Brexit, current far-right hatred and division, and yet she also doesn’t pin the focus on these things.

What is interesting is that it’s not a serious show - she manages to discuss these deep topics with hilarity. It’s funny and yet the message still hits home. She discussed her personal story a lot and boy you better be ready for her to discuss sex because as she announces mid-show, she loves to talk about it! Most of her shows have open discussions about sex, allowing her to make jokes and converse about the usually hushed topics that need discussing more freely.

Her openness at joking about sex during her shows forced Overman to use this show to also discuss a serious issue of sexual assault she had experienced during one of her shows. At the beginning of the show, the announcer proclaimed ‘no masturbating’ (sic). Everyone laughed at the opening gag but by the end of the show it took a sinister and horrifying turn where it was revealed that this had happened to her at one of her shows. It’s great that she’s using her show and comedy to bring light to such a serious issue. Overman is opening a platform to be able to discuss sexual assault in a comfortable and approachable manor and for that I applaud her.

The fact that no discussions or jokes were off the table and that sex, relationships and rude jokes were aplenty made it a show full of laughs and also lessons. Go see it, enjoy it and support this comedian. Also please continue to raise awareness of xenophobia, discrimination and sexual assault. 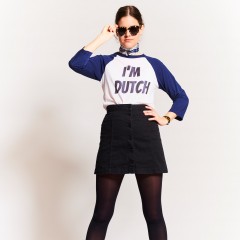