Voice MagReviewsChildren of the Quor…

Ambika and Andrew are the peanut butter and jam of comedy; an unlikely duo that found each other and now you just can’t get enough.

Children of the Quorn is the kind of sketch show that puts the audience in a state of laughter before anything has even happened. From the first interaction between Ambika and Andrew on stage, you could just tell that this was a show worth sticking around for.

The premise of the show is they want to do a seance with the audience, but they can’t contact the spirits until the ghosts ring the bell themselves. Yep, you heard me right. So in the meantime they decide to perform sketches whilst they wait for the bell to ring. Pay close attention however, because you will be quizzed by them and when you get it wrong, they will call you an idiot.

The duo were comical. For their first year performing together at the Fringe they owned the stage as if they were veterans of the comedy game. They bounce off each other’s energy, they never try to upstage one another, and they look like they’re genuinely having fun performing. Thank God these two found each other.

Their comedy was clever, sophisticated, silly and genius all at the same. From sketches about Lord of the Rings, Mamma Mia and Good Will Hunting, they hit them all with original, well-crafted material; not once did they go for the easy joke which made it all the more funnier when it landed. 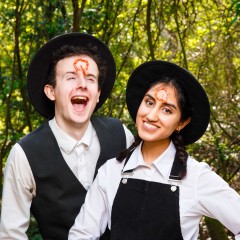 Children of the Quorn

Ambika and Andrew are the peanut butter and jam of comedy; an unlikely duo that found each other and now you just can’t get enough.