Risen from the grave of 2008 comes I Think You Stink, Nick Helm’s horror-comedy musical, which takes the form of an anthology of spooky B-movie-esque stories ranging from ‘The School Ghoul’ to a killer Tesco manager.

Opening with a melodramatic and brilliantly produced video, I Think You Stink fully embraces the camp feel of B-movie horror. From the first number to the last, there’s a hyperbole and silliness in all of these fantastic songs which work on both a comedic and musical level. This camp is then pushed further by the ridiculousness of the props and costumes, especially when it came to demonstrating guts and gore for the stage. This also means that (barring a few moments) the gore and horror was so heightened that even more squeamish (like myself) people would probably be able to deal with it.

In this extremely camp and heightened show a lot is required of these actors, and they manage to pull it off every time. They bring incredibly high energy to every number, pulling off intense dance numbers, whilst still maintaining a surprising high level of vocals. They were also constantly engaging with the audience, even throwing some inflatable eyeballs at us. Every single actor nailed the difficult balance between creepy and funny throughout the show, making the show amazing to watch.

I Think You Stink takes the silliness of B-movie horror and turns it into a thrilling and thoroughly hilarious experience. 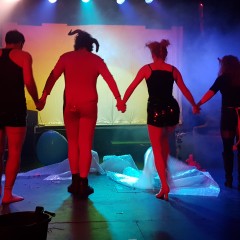 Nick Helm's I Think You Stink