Maisie is a likeable comedian who explores the point about mistakes made ‘in the moment’ and how you should own them. Regular laughs and threads tied nicely together despite the backing track.

This is a show dealing with elements of criminality, drawing comparisons with her own life experiences and utilising some high five-able jokes. It’s a simple, traditional stand up comedy setting, with the addition of some paper pegged to a washing line behind. The venue's a nice black-box space in Teviot House.

She kicks off with some humorous stories about her, her family and the class divide. She lays the scene, introducing a love for Mick Jagger by her and her mum, before then heading in to the theme of the show - the fallibility of humans. She illustrated these mistakes by flagging specific faux pas made by celebrities over the years.

Throughout the show she keeps her story arc, she involves the audience, and she ties threads together through clever references to earlier stories. This meant we could complete the picture of those stories and they often brought an admiration from the audience and, importantly, laughs too.

This isn’t a show for kids, but is a pretty relatable one for anyone past driving age. There’s plenty of laughter, some very loud ones, and some chuckling.

The 'Hang Fire' show didn’t impress me quite as much as Adam's performance last year. It's definitely funny, but something felt missing to be a raucous hit - maybe not helped by the slightly distracting show upstairs with drumming coming through.

You can find Maisie in the Gilded Balloon at 5pm everyday. Details at: https://tickets.edfringe.com/whats-on/maisie-adam-hang-fire 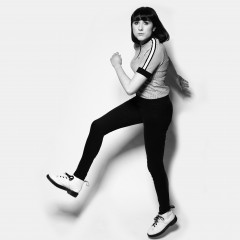 Maisie is a likeable comedian who explores the point about mistakes made ‘in the moment’ and how you should own them. Regular laughs and threads tied nicely together despite the backing track.