Voice MagReviewsEli Matthewson: An I…

An hour long comedy show packed with light hearted humour and a political kick that Matthewson executes with a confident air of professionalism, An Inconvenient Poof is sure to make you smile.

Eli Matthewson’s An Inconvenient Poof is slick, funny and controversial. The basis of his show centres around his navigation of becoming the best environmental activist he can be. From tree hugging for charity to legendary dinosaur related catchphrases, he covers an array of hilarious stories to amuse just about everyone.

You can tell Matthewson has become a seasoned pro as he seamlessly flows from section to section, expertly returning to gags that received a large reaction. He shares his experiences of being Head Environmental Prefect back in school to his endeavours in an adult store at 3 o'clock in the morning and just about everything else in between.

Eli Matthewson certainly knows how to work a room and has the audience relaxed and engaged from the offset. With moments of surprising crudity as he reflects upon his life experiences as a “short, gay, white man” - including his sex life, his quest to ensure everyone recycles their coffee cups correctly and an unusual smelling tree in his hometown of New Zealand.

He humorously covers typically controversial topics of religion and politics in a unique and hilarious way that will make you leave wanting to convert from your current religion to worshipping the Greek Gods. Whilst the idea of using comedy as a platform to use activism and discuss awkward subjects such as religion, he speaks with a slight satirical edge that makes you warm to his ideas and comic propositions.

An hour long comedy show packed with light hearted humour and a political kick that Matthewson executes with a confident air of professionalism, An Inconvenient Poof is sure to make you smile. If there's anything you take from this show: be more like the dinosaurs. 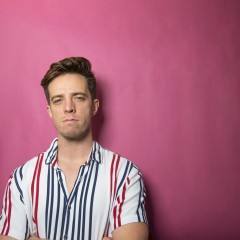 An hour long comedy show packed with light hearted humour and a political kick that Matthewson executes with a confident air of professionalism, An Inconvenient Poof is sure to make you smile.