E8 tells the stories of children society has left behind.

E8 tells the story of one day in a school in Hackney for excluded pupils, and the issues that two particular students and two teachers are facing.

Our central cast consists of Bailey (Alice Vilanculo) and Ryan (Harry McMullen), two students of the school with extremely troubled home lives, and their teachers Polly (Tina Chang) and Mo (Parys Jordon). Vilanculo is great throughout, giving the power and seething rage of her character, whilst still managing to demonstrate vulnerability and tenderness. McMullen is continually funny, with perfect comedic timing and boatloads of energy. The pair of them play really well off of eachother, with an intense and believable love/hate relationship with loads of little jabs, but also serious divisions.

Personally I found that the weaker half of the cast was the teachers. Whilst Chang was never outright bad, and nailed some of the more tender moments, she didn’t come across as particularly interesting. Whereas with Jordan, he really hit all his comedic moments, but when it came to drama he fell short of the mark, feeling almost half-hearted. One particular point of issue was the way in which the script seemed to suggest sexual tension between Polly and Mo, but their dynamic just doesn’t work. The believability of their relation to the students was much better, but still felt a little underwhelming.

Beyond the performers, I felt that the script was a little weak. The main thing going for it is the authenticity, the dialect (and the actors’ use of it) felt true to life and grounded the E8 in its specific location and the issues were very real and present. Unfortunately for the clear and important message, the writing feels disjointed and a little cliche. Big dramatic moments feel contrived and interpersonal relationships feel murky and inconsistent, which is a huge problem for a play so focused on human experience.

E8 says important things and tells an important story, but never really has the emotional resonance to give these stories the weight that they deserve. 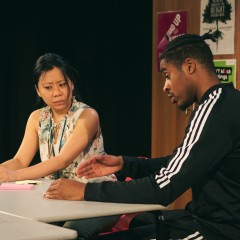 E8 tells the stories of children society has left behind.