He's been sober now for 25 years. On the day of his father's funeral, Benedict receives an unsettling final bequest: a bottle of exceptionally fine red wine. Will he drink one final toast to his father?

The Red, currently showing at the Pleasance Dome, tells the story of Benedict - a former alcoholic. On the day of his father’s funeral, he reads the letter left for him which contains one final request: drink a bottle of exceptionally fine wine.

The acting from both of the actors is incredibly strong and convincing. The hour long production is sincere and thought provoking, and I found myself really sympathising with the unsettled character of Benedict. This said, I felt the story could do with a few more rounds of refinement. In multiple places, I found the pacing to drag slightly, though this may be due to the fact that the play is essentially an hour long scene. The to-ing and fro-ing between whether or not to drink the wine began to feel slightly repetitive to me, however, this is nothing that a small amount of development couldn’t fix.

The production values were well thought out and definitely added to the performance. Stacks of wine bottles consumed the stage in front of a faux red brick wall which really created the illusion of the actors being in Benedict’s dad’s wine cellar.

The sincerity of the actors really made this performance for me. They were well rehearsed, thoughtful and sensitive and brought up some real issues in different circumstances you may not have considered before. They handled the topic of alcoholism very well and you really feel for the character of Benedict and the troubles that he has been through.

If you’re a wine lover or looking for something thought provoking, The Red could be the show for you. 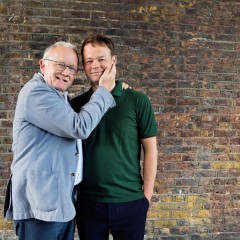 He's been sober now for 25 years. On the day of his father's funeral, Benedict receives an unsettling final bequest: a bottle of exceptionally fine red wine. Will he drink one final toast to his father?