"Award-winning all-male company makes an explosive Edinburgh debut. With contrasting scores by artist Keaton Henson and composer Charlotte Harding, this double-bill asks where we see ourselves in relation to the 'other'."

The BalletBoyz performance at the McEwan Hall consists of a beautiful, intricate and thoughtful double-bill of Them/Us. Two pieces that are not to be missed.

The production opens with Them, a piece created collaboratively between the dancers ,who quite evidently are excellent choreographers also. Movement throughout is authentic and perfectly in cahoots with the music, which was composed alongside the creation of the choreography. The music is minimal, not overpowering the movement, in a way that appears that both the movement and the melody come organically from the same place. Much of the movement was developed from improvisation, which feels natural to watch as much of the basis of the choreography comes from gestures and handshakes and forms into something much more complex and striking to watch.

It is pleasing to see the choreography focus on innovative and organic movements, rather than the popular tricks and turns that sometimes take over dance performances. The audience is instead awed by the stunning creativity of the intricate moves as the dancers thread in and out of each other with impressive precision. They move with an effortless means in their 80’s tracksuits as they swing up and down from the only prop on the stage - a large open metal cube. The strength, technique and agility of these dancers is something to be marvelled at.

Us, developed from a duet, is equally as stunning. There is a switch in mood from the previous piece, with all dancers dressed head to toe in dull, long clothing. Though, there is still the same level of intricacy to be awed by. The lines and precision of their movement is impressive and athletic. As this piece draws to a climax, two dancers perform the original duet which, to me, is the highlight of Us. Their duet is strong, combining counterbalances, interlocking movements, effortless lifts and breath-taking contact work.

This double-bill has many strengths, but the undeniable excellence of the contact work has to be one of the strongest points. BalletBoyz are fluid, strong and fierce, destroying stereotypes of typical male dance and bringing a new dreamy dynamic with them in their Edinburgh debut. 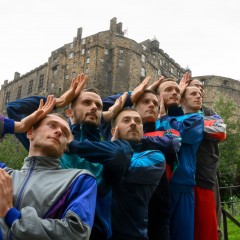 "Award-winning all-male company makes an explosive Edinburgh debut. With contrasting scores by artist Keaton Henson and composer Charlotte Harding, this double-bill asks where we see ourselves in relation to the 'other'."