Alun Cochrane's 'brave and new' comedy is more of a dry slog.

Alun Cochrane started his set with a disclaimer, that he was going to treat us like ‘grown-ups’ and therefore he wouldn’t be mincing his words and will be focusing on ‘facts’, not feelings. Then he proceeded to spend half of his time talking about his feelings on how we live in outrage culture, how he feels about not being able to use outdated terms, and how he feels about his daughter being taught the nefarious and pernicious golden rule of ‘not hurting people’s feelings’. This kind of callous narcissism framed as objectivity runs through the entire set, and most of the time those with ‘hurt feelings’ are people already marginalised by society. Most of this stuff just comes across as more overwrought, soapboxy and spiteful than actually funny.

Cochrane also repeatedly declares that words are not violence, no matter what people protest to the contrary. Whilst he’s entitled to have that opinion, I’m sure if there was a trans person there, his mockery of hospitals using more inclusive language and claims about ‘trans activists’ making life worse for ‘normal trans people’, they would find his words pretty painful. I can’t imagine a plus-size person would leave unscathed from the 15+ minutes of his set spent mocking them in a variety of ways, whilst protesting that ‘he has obese friends’. I can say personally that Cochrane declaring that judging Liam Neeson for his racially motivated will for revenge amounted to thoughtcrime, whilst ignoring the fact that these thoughts have and do turn into actualised violence and prejudice directed at black people, was deeply isolating (especially given that I was possibly the only black person in the audience).

Now, this is not to say that there isn’t a place for making people feel uncomfortable, or even hurt, in comedy or performance art in general. However, whenever Cochrane made uncomfortable/hurtful/borderline bigoted jokes, which constituted about half of his set, they always felt cheap, easy and purposeless. Throughout the show, it is made very clear that there is a very specific audience he was trying to please, and that excluded several groups of people.

The most frustrating thing is that Cochrane is clearly a talented comedian, with a grumpy but fun tone that is incredibly effective at connecting with an audience. There were some genuinely hilarious points where he moved away from hurtful humour, but as if it was in his contract, he always brought it back to a lazy joke about one of the groups he decided to tear down for the night. At almost every possible opportunity he punches down, moving from Muslims to homeless people to trans people, he couldn’t resist going for the (quite frankly boring) low blows. When he wasn’t punching down he was complaining about not being allowed by society to punch down anymore (despite the fact that he has a month-long show at the Fringe). Even worse, he was clearly aware that he was doing it, given his constant reference to the often stony-faced audience responses to his more offensive jokes and how he was likely to get misquoted on Twitter.

Ultimately, Alun Cochrane spends too much time on pushing boundaries in the most boring way possible and not enough time on actually being funny. There’s nothing new about pining for halcyon days where nobody would publicly call him out for his jokes, and there’s nothing brave about punching down at some of the most downtrodden in society - especially at times like these. 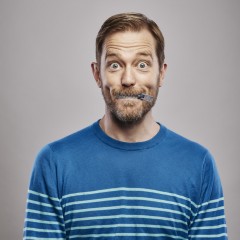 Alun Cochrane's 'brave and new' comedy is more of a dry slog.