"Armed with just himself and a chair, Lewis Doherty (creator of Wolf) presents Boar. A one-man fantasy adventure tale."

Excellently skilled, fast paced and noisy, Boar certainly does not disappoint. Armed with nothing but a chair, himself and an outrageously talented set of vocal chords, Lewis Doherty wows the audience with his skilful sound effects and array of farcical characters.

Boar tells the epic adventure story of two orphaned, bloodthirsty rogues set on a mission to save the King’s daughter from an evil dragon with the help from a thief and a less than helpful Prince.

With what the performance lacks in set and props, Doherty makes up for in sensational vocal work and physicality. He tremendously adapts from character to character throughout the hour long epic, leaving the audience in stitches throughout. Doherty’s use of the body is something to be particularly noted. Not only does he briskly switch between characters, but his rapid fire gestures set the scenes brilliantly.

Lighting is simple, yet clever, complimenting the narrative with atmospheric hues representing both the mood and location. A stand out moment has to be the opening scene, set at sea, paired with an introduction to Doherty’s impressive sound effects, truly creating the illusion of the pirates at sea.

With such fine attention to detail on the vocal sound effects and imagery that it consequently creates, the atmosphere could be compared to that of a cinematic experience. A personal highlight has to be the rapid ‘swooshes’ of the heroine’s sword and the shockingly lifelike imitation of the bear, chasing after the two protagonists on horseback.

Boar is a breath of fresh air, sure to entertain and can be found at the Pleasance Courtyard. 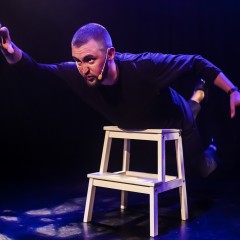 "Armed with just himself and a chair, Lewis Doherty (creator of Wolf) presents Boar. A one-man fantasy adventure tale."