It was non-stop laughter during the show, as Ruffell shared that the secret to happiness is taking the ups with the downs and resisting searching for perfection. Her jokes were on point and meaningful, personal yet profound. It was clear that the performance room held a collective, community vibe and it felt like a comfortable, fun inclusive space to be in. It was a kind space too, as rather than victimise or individualise latecomers, she instead connected to them and warmed them to the show. Ruffell announced at the start that this wasn’t going to be one of those awkward uncomfortable fringe shows and she definitely delivered.

The show mainly explored her own relationships whether with her mother, the audience or her partner. She used self-related anecdotes to raise wider societal issues and awareness. Ruffell did not shy away from presenting a much-needed realistic and personal portrayal of the LGBTQ community, contradicting wider media publishing and sharing relatable content for audiences.

She managed to discuss important topics and political atrocities whilst still including a good amount of humour and fun. The content was relevant to everyone from discussing renting and house buying to discussing choosing to have children but it was also poignant with the LGBTQ community. Ruffell also didn’t shy away from discussing women’s experiences and everyday occurrences in daily life, making it relatable to all viewers. This was a show for everyone, it was well-written and perfectly delivered.

The comedy was quick and intelligent, snappy and sharp. It was well paced meaning the hour watching flew by. The vibe of the audience was lively and engaging, it felt balanced and funny. There was just the right amount of debauchery and rude jokes mixed with finding the humour in societal commentary and life observations. There was a certain amount of physical comedy too which shows that Ruffell has multiple comic talents. Ruffell proclaims herself that she manages to be a popular performer but without a huge level of fame. It’s an achievement of managing to be hugely talented, experienced and proactive in comedy whilst avoiding the pressure of celebrity. It’s a down to earth, real show that will resonate with audiences. 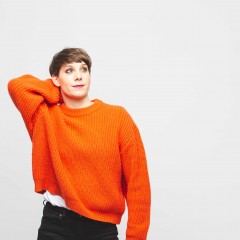