A hilarious, funny and relatable show that is edgy and not afraid to confront.

I think it’s fair to say that this show is extremely female-orientated. There is multiple anecdotes about ‘women’s’ problems’, using relatable issues to warm the audiences to Bauer and build a comic connection to the humour she iterates.

However saying this, Bauer isn’t afraid to single out certain individuals in the room, whether that be due to their ‘home-cut’ fringe that looks like hers once did, their ‘thin’ body or their ‘Male ignorance’ to her discussions. It’s all done in jest, mind, and provides huge laughs from the audiences.

Bauer uses her personal problems and family history to provide relatable, understandable and humorous anecdotes and stories. Her content was well-received by the audience who nodded, whooped and cheered along to the various scenarios she was discussing, myself included. Her comedy was to discuss real-life experiences that often go undiscussed and unpublicised, but to talk about them in a relaxed and comedic environment.

That said, the jokes about creating emotional upset in public purely for attention as well as laughing about mental health issues didn’t particularly sit well with me, nor the inventing made-up childhood and teenage trauma to ‘outdo’ one another or hoping for a loved ones death to be announced via post-it notes during school for ‘entertainment’ in their teenage years. These are real issues and whilst a lot of her humour was close to the edge, it did sometimes cross a line that shouldn’t be crossed (especially not without a trigger warning on the show). It felt like it was trivialising serious health issues and risking labelling and confusing real issues with attention-seeking.

Regardless, her show was funny and relatable, with everyone understandably in stitches. This was her first Edinburgh show and she deserves to be commended for the topics she discussed such as female empowerment, weight issues, working class life and hidden women’s issues. As she stated, being a female comedian she is automatically ‘forced’ to represent all women. Rather than fight this association, Bauer does the opposite and owns it. Yet the show points out that she can’t possibly represent all women. She is unique, we are all oppositional and individual. She is a brilliant comedian, able to hold her own and captivate an audience, whilst connecting and relating to every single person in the room. She has great stage presence and personality, not to mention able to react to the response and mood of the room as well as surprise and connect. 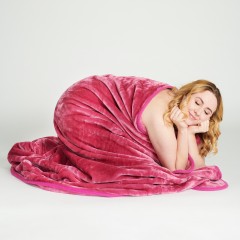 A hilarious, funny and relatable show that is edgy and not afraid to confront.