Voice MagReviewsLand of My Fathers a…

From the moment you walk in, you know this show’s going to be wild, as Rhys Slade-Jones greets you covered in Welsh paraphernalia, ranging from an apron with the Welsh flag to a huge (traditional) horse head. From under this mass of cloth, he belts out the Welsh national anthem, then strips from all of this to a pair of shorts with a Welsh flag on them, performing the rest of the show with just those on.

In a sense, that removal of layers kind of mirrors the vulnerability Slade-Jones shows throughout this performance, where he talks about his homeland and more specifically the village that he grew up in, which was displayed through physical pictures he projects onto a screen. As he swings from explaining Welsh culture to his own family’s stories to reading his mum’s diary everything feels personal and intimate. At the same time, with his frank and funny story-telling, the show manages to be eye-opening without feeling didactic, telling stories from communities who we rarely hear from. At the same time, he knows how to keep an audience engaged, swiftly and deftly moving from silliness like a mumbly Tom Jones impression, to incredibly emotional moments about his parents’ relationship. Slade-Jones bares all in a way that feels incredibly authentic throughout, with his identity as a gay working-class Welshman never being tamped down for an audience who isn’t necessarily clued in.

The power of community is ultimately at the centre of the tales weaved throughout the show, and Slade-Jones makes his audience a microcosm to demonstrate that power. The show always feels like a close and personal conversation (aided by the warm lighting), with the audience even getting to sing along with him at one point. At another point, we all (Slade-Jones included) just sit and listen to an audio track from an event at his home village, and because of the sense of openness and community fostered, we connected to them (and each other) in a deeply moving way.

Drawing from a deep well of truthfulness, friendliness and authenticity, Land of My Fathers and Mothers and Other People is a tender and communal experience which definitely shouldn’t be missed. 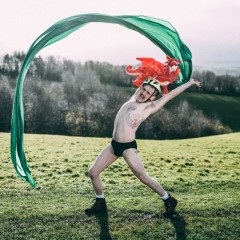 Land of My Fathers and Mothers and Other People