A Grave Situation brings something new to an overwrought topic.

A Grave Situation is a whimsical production that follows five struggling gravedigger brothers as they’re thrust into the chaos of the Second World War, with only their shovels and ingenuity to get them through.

From Journey’s End to War Horse, we as Brits are inundated with grim and intense war dramas showing the tragedy and heroism of these wars. A Grave Situation takes the opposite approach, taking an overwrought genre and managing to find some whimsy and fun in the melodrama. At the same time though, there’s a clear awareness of the genre conventions which it plays with, especially with the clear and hilarious satire on the often one-dimensional and reductive portrayal of weeping women in the UK during the war. The entire Young Pleasance company brings energy which really sells the silliness of the piece, with big, bold and well-coordinated dance numbers around an incredibly mobile set. However, at several points in the production, energy and comedy supersede clarity, creating some jarring pacing and a plot that becomes nigh-impossible to follow at points.

Something that’s evident throughout the play is the effort given by the actors in a physically challenging piece, and the chemistry between them. One of the most notable in this is the family unit of Ethel, her sister and her mother, all of whom knowingly and perfectly play melodramatic caricatures of wartime women, bouncing off of each other really effectively. Beyond them, the central romance between Ethel (an assistant librarian) and Chippy (one of the gravediggers) is played in a way that balances satire and silly humour with a genuine infectious warmth. Outside of the aforementioned people, there’s a sense of camaraderie pulsing through the entire cast, which is pretty incredible given how this is a production made in a week, almost exclusively involving people between 16 and 21.

All in all, whilst being a little rough around the edges, the Young Pleasance’s production of A Grave Situation has erratic and joyful energy which is fun for all the family

This review was of a preview performance at the Pleasance Islington. A Grave Situation will be running from the 2nd to the 17th of August at 15:15 in the Pleasance Beyond 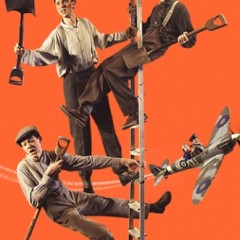 A Grave Situation brings something new to an overwrought topic.