Review of Life of Pi theatrical adaptation shown at Sheffield Theatre's The Crucible until 20th July 2019. Based on the Booker award winning book by writer Yann Martel and adapted by Lolita Chakrabarti.

The theatrical interpretation of the Life of Pi adapted from Yann Martel's multimillion selling novel falls nothing short of outstanding as it details the compelling story of a 16 year old boy, Piscine, over-coming the odds while stranded at sea.

The awe-inspiring writer Lolita Chakrabarti and director Max Webster brought this story to life in a vision that can only be described as magical. Giving the play more of a dramatic structure and constantly challenging perspective. The actors in this show have a clear flair for storytelling and a powerful intensity which is both inspiring and motivating. Easily overshadowed by the other elements in this show actor Hiran Abeysekera maintains the lead and plays both a comedic character with impeccable timing to a completely raw character with such a deep intensity.

The use of puppetry in this performance was a completely new experience for me and was pulled off superbly urging me to want to see more. The actors who controlled the Bengal tiger, Richard Parker, we so in tune with the puppet that the audience was transported into a world witnessing a real life tiger on stage. As an audience member I could see the different personalities of the different animals which aided in the emotional aspects and reality of this play. The animals were designed as so they were created out of driftwood, fitting in with the story brilliantly as so they had been stranded in the ocean. Lost forgotten pieces, yet with so much story to them. I felt that the grittiness of this design really aided in the darker tone of this adaptation.

All aspects of this play were truly brilliant. However, the stand out aspect for me was the graphics. Particularly the use of lighting and projection. Working with the actors and the set to create one of the most visually rich performances I have seen in my life-time. The play constantly revolves around being based in Pondicherry, out at sea and in Mexico, the projection and especially the set brings this to life. With a full floor projection showing the waves in the ocean rippling into the floor of a hospital in Mexico, the visual storytelling is breath taking and helps the audience seamlessly follow the shift in narrative and time, The lighting imitates the heat in India to the coldness of the hospital and with it shows a change not only in location but also in character and emotion.

Overall, I loved this entire performance and will defiantly be recommending this to my peers. This performance has inspired me to look out for what the writers, director, actor and designers all do next as if it is anything like this play it would be a fantastic performance. 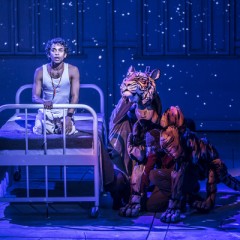 Life of Pi at Sheffield's The Crucible Review

Review of Life of Pi theatrical adaptation shown at Sheffield Theatre's The Crucible until 20th July 2019. Based on the Booker award winning book by writer Yann Martel and adapted by Lolita Chakrabarti.