Student review of Sheffield Theatre's World Premiere production of Life at Pi. The production runs at the Crucible Theatre till Saturday 20th July.

I feel I must start this review with an appreciation and congratulation of the skill and ingenuity of the actors onstage and the creatives backstage who have produced a truly sensational piece of theatre. Life of Pi can only be described as boundary breaking and awe inspiring.

The obvious stand out element of the show is the use of puppetry which is simply breath-taking and adds a wonderfully magic and fantastical element to the show, transporting you to this surreal and unbelievable world. The designer's decision to craft the puppets to look like they were made of driftwood was so clever and as really created the feeling that they could have been pulled from the ocean. I also cannot praise the actors/puppeteers who operated the puppets enough; their manipulation of the puppets was so flawless you completely forget they were even there

Another stand out element of the show for me was the use of projection, lighting and set. I have mentioned all three together as they are so integral to one another and work continually to create the beautiful world that unfolds onstage. Tim Hatley’s set along with Tim Lutkin’s lighting and Andrzej Goulding’s videography are flawless and do an incredible job transporting the audience constantly between a clinical, grey and cold Mexico, a vibrant and colourful Indian market and a vast, isolating prison-like boat lost at sea. The way in which the three work in conjunction is a true pleasure to behold and left me completely stunned and moved beyond words.

Hiran Abeysekera's portrayal as Pi is outstanding and he establishes a powerful connection with the audience from the beginning. His comic timing is impeccable and he posses a true talent for story telling. The emotional journey Abeysekera transports the audience on is a wonder to behold and experience. His transitions from the scene's lighter scenes to the plays darker and more disturbing scenes demonstrates Abeysekera's immense talent which is never overshadowed by the spectacle occurring around him.

The way in which the production played with the audience’s eye and the ability to suspend disbelief is something I will not easily forget and the joy, fear, laughter, pain and magic I experienced during this standout production. I can say without a doubt this is the best thing I have ever seen at the Crucible and I feel privileged to have seen it during its first run. 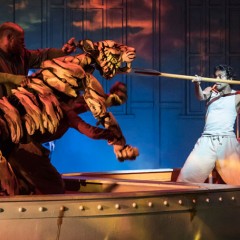 Student review of Sheffield Theatre's World Premiere production of Life at Pi. The production runs at the Crucible Theatre till Saturday 20th July.