This is a review of the FSN music concert at Rock City on Sunday 7th July 2019. The winner of the local competition gets the chance to perform at the Splendour festival on Saturday 20th July at Wollaton park.

When we first arrived at the venue, there was a calm atmosphere and plenty of space to move around.

After this act, the host of the night explained the voting process, and asked us to vote for all 7 acts which were going to be performing. We found this very confusing, as we hadn’t heard any of the other artists performing, so we didn’t actually know what we were voting for. We don’t think the voting system was very well explained to the audience.

The next act was Don’t Forget Rupert, who were an indie rock band. Their upbeat music allowed the audience to get involved more, and improved the atmosphere overall. We liked this group because they engaged a lot more with the audience.

After this was Mollie Ralph, who was our personal favourite. She was a Jazz singer, who had good backing singers and band. Her range of slow and fast songs changed the dynamic of her set, which kept us interested.

Exchecker was next, and was a rap performer. Some people in the crowd seemed to enjoy his performance, however, we could see many people going to the bar / toilets during his set including ourselves, which could be because his music contrasted significantly to the others.

The next act was called Desensitised. They were a group of female rock singers who were very enthusiastic, but just weren’t to our personal music taste. Despite this, the crowd seemed to enjoy them.

Next up we’re Near Mrs who were a young male indie band. They spoke to the audience and expressed their appreciatation for our support.

The last act was Remy who won the overall contest, who you will be able to see perform on the main stage at Splendour. We thought he had a good set which also had a range of dynamics as his last song was performed solo.

What could have been improved: 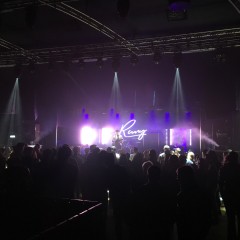 This is a review of the FSN music concert at Rock City on Sunday 7th July 2019. The winner of the local competition gets the chance to perform at the Splendour festival on Saturday 20th July at Wollaton park.