A fantastic introduction to Sufi music from one of the greats. MIF has done a fantastic job of programming work that fails to get mainstream consideration within the North-West, bringing new audiences and  talent to our regional stages.

As part of this year’s Manchester International Festival, Abida Parveen returned after her MIF debut in 2013, performing for one night only to a sell-out audience at the Lowry on 5 July 2019. This one-off collaboration with Nahid Siddiqui, an icon of South Asian classical dance, brought a palpable atmosphere to the Lowry.

Following a brief introduction from John McGrath, artistic director and CEO of Manchester International Festival, the room was filled with hushed voices of excitement as the stage darkened.

Siddiqui’s fluidity of self, through minutely precise movements was captivating. The control and command over her body demonstrated the sheer talent she possesses. Her presence entirely filled the large stage, which had been mostly left bare, except for draped chiffon that framed the proscenium arch.

The lights darkened once again and a raised platform was brought onto centre stage. As Parveen entered there was rapturous applause which led to a standing ovation from the crowd, demonstrating her status as a Sufi icon.

Breaking out from traditional gender stereotypes, Parveen performs music notably sung by men in the form of ghazals and kafis (a form of poetry originating from Arabic poetry) in Urdu, Sindhi, Saraki, Punjabi and Persian. Having had no prior experience of Sufi music before, I was immediately mesmerised by Parveen’s transcendent quality and ability to command the stage. The audience was riveted, transfixed by the sacred music, all with a message of peace, love and harmony.

In a moment of quiet between the songs, the two ladies next to me asked whether I understood what was going on, being new to the genre and unable to understand the language. For most of the performance I had very little understanding. Throughout, I missed the nuances in the text, which was met by shouts of joy from the audience, along with cries of adoration within any moment of quiet.

Despite this, Parveen’s performative quality was something in itself. The way she commanded the stage through her physical presence and her vigorous arm movements was captivating. Accompanied by the driving beats of her music, the whole production was impassioned and brought about the spiritualist nature of the songs she was singing.

Ultimately this was a fantastic introduction to the genre from one of the greats. I left the theatre with a sense of optimism and the profound belief that I had witnessed something truly wonderful. MIF has done a fantastic job of programming work that fails to get mainstream consideration within the North-West and utilising one of the amazing performance spaces Manchester has to offer. It was amazing to see such a diverse audience fill the seats of the Lyric Theatre, demonstrating the desire for international work that breaks from the traditional theatrical model.

My final thought is a recommendation to everyone. Exposing yourself to new art and forms of creative expression that originate within other cultures may be taking a step into the unknown, but that step could be the best thing you do all year!

Check out the other exciting performances taking place as part of Manchester International Festival here. 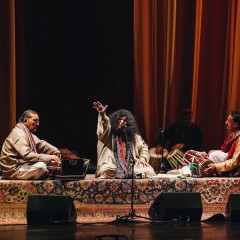 A fantastic introduction to Sufi music from one of the greats. MIF has done a fantastic job of programming work that fails to get mainstream consideration within the North-West, bringing new audiences and  talent to our regional stages.