The queue for this event bent half way around the street, something like a nerdy camp-out for the latest games console I’ve probably lost touch with. Apparently some people had decided to come an hour early to get good seats, for a standing performance. And then complained.

We were soon lead into a huge dark room with a stepped, central stage bisecting the audience. Only, it wasn’t a stage, and they weren’t an audience. I’d walked into a nightclub, complete with DJ.

Still taking a few seconds to register what exactly was happening, a random guy started enthusiastically dancing up to me and giving a lot of eye contact. I’m afraid I didn’t know what to do with that other than stare back dumb-struck.

Once I’d come to terms with the idea that I hadn’t just repelled an attempt to chat me up, I noticed other unhealthily enthusiastic people accosting strangers, and eventually dragging them up on stage. After you’ve been subjected to so much weirdness, you just kind of go with it. I found myself up there, albeit using the only moves that’ve ever felt natural to me, somewhere between ironic and awkward dad-dancing.

The DJ kept playing, and people kept dancing, until we were eventually herded back off stage, and thanked for our valiant efforts. From here, the story started to take shape. What followed was a series of flowing group dance-segments, all feeding into the emotions of the emerging lead protagonist. These rolled nicely into the opening dialogue, which had a nice balance of comedy and reality to them. We’re introduced to Kaelo, a guy between jobs (and possibly relationships), stumbling his way through existence, suddenly faced with the brick wall of his own mother’s death. We follow him on his journey back to his roots, to South Africa (as do his dancers, who seem to serve as muses for the performance.) Along the way, we’re treated to strange lights, the occasional small explosion and the odd pyrotechnic, as well as some jaw-dropping visual props, transforming a relatively simple wooden stage into a myriad of small worlds. However, we aren’t allowed to idly watch. Throughout, protagonists slip off stage and into the crowds, often popping up in front of me seemingly out of nowhere. I was struck by the strangeness of seeing an audience’s gaze forced to go 360 degrees, constantly tracking the unfolding people and events, there’s something inherently odd about seeing a crowd of people stare down one completely oblivious person.

The performance was peppered with opportunities to act as part of a crowd, a forest and even a rebellion, complete with falling campaign pamphlets and rubble. The remarkably plain touches required to change the whole atmosphere between scenes, be that a different shade of light cast on protagonists, or suspending them to paint an interaction as a memory, was truly a credit to the set designers.

This performance was the complete story-telling experience, leaving all with a bounce in their step and a uniquely shared experience of ownership. 10/10, would recommend to a friend. 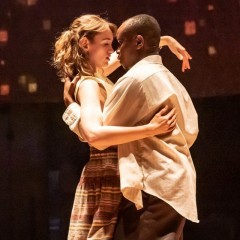 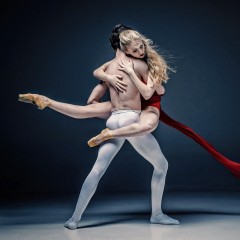