Brassed Off tells a heart-warming story of miner accompanied by a live brass band!

On Friday 23rd of June, I had the wonderful opportunity to see ‘Brassed Off’ at the New Vic Theatre. The play is based on the film of the same name, a 1996 British comedy-drama film Tara Fitzgerald and Ewan McGregor. The story follows the troubles of a colliery band, following the prospect of closure of their local pit.

The show covers a range of aspects and genres, switching from light-hearted to deeply moving in a second. This is due to the phenomenal acting by the whole cast and the wonderful music from TCTC Group Band from Crewe. Their performances blew me away; the standard of performance was truly incredible. The band was supported by fantastic solos from various members of the cast. I loved how the band moved to play indifferent places as this really engaged the audience. A special well-done must be given to the younger cast member, who acted amazingly and added realism to the show.

The story was based around the real struggles of the Grimethorpe colliery band and their own struggles against pit closures. This subject is quite close to the hearts of the people of Stafforshire, as the area has a mining tradition and has faced similar pit closures in the past. Pit closures lead to hundreds of miners losing their jobs and Brassed Off tells this tale of the choice that the miners had to go through; taking the redundancy money on offer or keeping their jobs.

The show was humorous and the well-timed jokes about the Conservative party certainly made the audience laugh. I also found the part of the show when the band were playing their instruments as if they were getting more and more drunk. However, Brassed Off was really about the strikes and hard lifestyles miners went through. It was quite political and dealt with the topics of the declining coal industry and the lost lives in mining communities with care. With the combination of heart-warming moments that show the power of community and hope, Brassed Off makes for a beautiful piece of theatre. 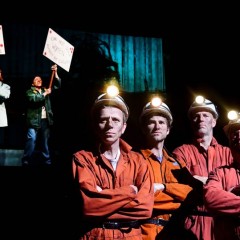 Brassed Off tells a heart-warming story of miner accompanied by a live brass band!