The Book of Mormon has graced the Prince of Wales Theatre for several years now, and remains just as outrageous and as unpolitically correct as ever! Written by the comedical brains behind the cartoon South Park, the musical follows the tale of two Mormon missionaries sent to Uganda.

As one of the rudest scripts currently in production, the performance had me weeping with laughter and gasping with horror in equal measure. With songs such as ‘The All-American Prophet’ and ‘You and Me (But Mostly Me)’ the musical ridiculed every creed, race and religion. Consistent in its mockery though, the performance won every audience member over, and was rewarded with a standing ovation.

However, the musical wasn’t rude and shocking merely for the sake of being outrageous, but instead made some poignant statements hidden behind the facade of comedy. The script addressed the ‘white saviour complex’ as well as highlighting differences between cultures and living standards around the world. Although its vast collection of swear words ticked every expletive off the bucket list, they were thrown around with such ease that the audience always found the profanities hilarious instead of uncomfortable. Meanwhile, the simple set allowed the crafty lighting design to underpin the humour with tenacity.

Nor did the production only mock people, for even the genre of musical theatre itself was fair game. From overly-camp tap numbers to mimetic stock characters, the performance was a whirlwind of dazzling costumes and brightly-adorned backdrops. An overall ‘must-see’ for any musical theatre buff over the age of 15 - just don’t go with the family! 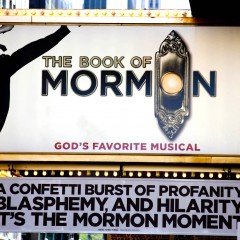 The Book of Mormon: No-one’s safe!