I have watched some great shows this Fringe, from poignant one-person theatre to A.I. improv. As an audience member it’s often interesting to analyse and critique your experience: why did they say that? Was that the intention? Did that idea come off? But sometimes, you just want to watch something really, really funny. Enter Pelican: Fisk.

With Fisk, Pelican Comedy set an instant vibe of ‘they’ve got this’. From opening choreographed sequence to beautifully bizarre crescendo, they put the audience at ease, and get huge laughs in return.

Sam Grabiner, Jordan Mitchell and Guy Emanuel have created a farcical detective story surrounding the mystery of a doubles Champion’s death. Contrary to its absurdist performance style, Pelican have formed quite a compelling narrative. Due to the group’s talented acting skills, their madcap characters are actually rather believable, and I found myself drawn into the story.

It’s a slick performance. Timing is impressive, not only in terms of immaculate comedy timing on stage but also from a practical perspective. With so many apparent tangents it’s amazing they fit the show so tightly into the hour; off-piste, yet on track.

The show is peppered with dodgy accents, terrible moustaches and continual character swapping, all boosted by the groups skill in ad-libbing, heightening slips, inevitable with so many bizarre prop and costume exchanges, to create bigger and better laughs. A ridiculous drinks spitting routine is practically Python-esque in delivery, and the same can be said of a persistent use of umpire chairs, a hilarious deliberate hindrance.

There is a fine line between comedians cringingly sniggering at their own jokes on stage with arrogance, and the complete delight of watching genuine uncontainable corpsing. Pelican have achieved the latter. Whether intentional or organic, the character-slipping breaking of the fourth wall is marvelous to watch. And it helps that they seem like they’re really enjoying it.

My only negative critique is a simple staging one. It was significant that myself and several other less vertically graced individuals in the audience missed a fair few laughs due to action occurring on the floor of the theatre, a lot of which (I was informed by a taller companion) were very funny and well thought out. Due to the nature of the subtle rake in the Theatre Box and other similar venues this has been a recurring difficulty during the Fringe as a whole. Maybe it’s a note of worth, or perhaps I just need to invest in a cushion.

With such precise and accomplished physical comedy it could be feasible to skip on the writing, but certainly not here. Pelican’s writing is witty, their use of words, particularly in naming their characters, a delight. A firm favourite of mine to see out this year’s festival; bonkers lines and belly laughs, Fisk is an hour of absolute joy. 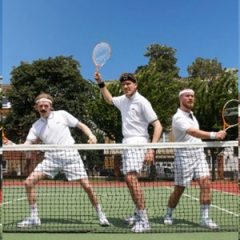