A jubilant journey through the life of J, a gay man in his late twenties with his longest companion - an angry crab!

Crabmeat was one of the Brighton Fringe shows I was most looking forward to seeing, but after watching it in all its glory it wasn’t the favourite I thought it would become.

I was really looking forward to seeing this show delve into the deeper issues of anxiety and panic disorder along with the associated themes of self depreciation, low self esteem and self doubt. But ultimately many of these were touched on far too quickly and in more of a gimmicky unrealistic way that could be perceived as detracting from their severity.

As an example, the show opens with the main character J having a panic attack in one of the clubs bathroom stalls, this I thought was an incredibly powerful way to open the show. The acting throughout was fab and it really sucked you into the story in the first few minutes but almost as quickly as this panic attack had escalated it stopped completely.

No slow shaky breathes or voice cracks, merely just a rather chipper ‘oh hello there!’ directed at the audience. Now having had my fair share of panic attacks in the past, if I could suddenly just stop and carry on my day as chipper as I was before any panic set in, that would be a complete dream. Unfortunately it’s not and the hyperbolic switch seemed to come across as slightly insensitive before we’d even hit the ten minute mark.

I did however think the metaphor of this imaginary crab essentially being the voice in many people’s heads that constantly critiques them in everything they do worked so much better than anything else. In fact I’d say it’s definitely this show’s selling point. The show is full of colour and moments of light hearted humour whilst not shying away from the more unsightly breakdowns I’m sure most people have had in a club bathroom stall.

For managing to toe the line between the two so well, Joshua Dean Perry, the show’s author and sole performer, deserves every bit of praise he gets. Never before have I been laughing at the fact he couldn’t drive ‘cuz you know…gay?’ to wanting to give the character J a hug as he spirals into deeper depths of self doubt in this bathroom.

At times the show felt a bit disjointed, with a few too many time jumps for my own personal taste. Although I’m sure intentional, I think it might have worked better if those shifts through time were more clearly signposted. Too often I would find myself halfway through a new scene and would only then realise the scene was taking place in the past or J was speaking to a different character.

That being said, I don’t think it distracts from the beauty and simplicity of this show that does wonders in showing what a true experience of living in today’s world as a member of the LGBTQ+ community is like. If you can get down to Brighton this is sure worth seeing! 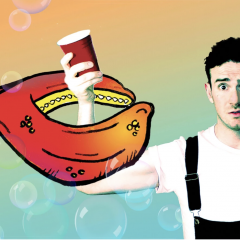 A jubilant journey through the life of J, a gay man in his late twenties with his longest companion - an angry crab!