Voice MagReviewsKotoku and The Moon…

A puppet show hailing from New Zealand, aimed at children and adults alike, this production was like nothing I'd ever seen.

Without a doubt the thought and effort into the set and costume design of the puppets is this productions biggest seller, rendering it’s plot and purpose rather lacklustre in comparison.

In its second showing outside New Zealand, Kotoku and Moon Child was an enigma of its own. I made sure to go in with an open mind since puppeteering mime isn’t necessarily as far up my street as Charlie Chaplin-esque work might be. That being said I was pleasantly surprised by the puppeteering work itself, as it was full of bright colours and imaginative transitions.

The play starts with two apparent genderless moon people/beings/creatures (delete as appropriate) witnessing the birth of their ‘Moon Child’. A puppet made of a white balloon tied to a white muslin cloth, complete with a face that looks equal parts anxious and disgusted at anything it sees - at least there’s something relatable for any adults who may be in the audience!

Along with this supposed ‘Moon Child’ a small moon orb is introduced quickly. This mysterious orb floats away to Earth and so begins an endearing story of this incredibly cute puppet discovering the planet we all live on.

It’s here that my other favourite puppet from the show is introduced - a rather evil looking stork or heron type bird who collects random objects, the mysterious orb included. Now it’s still an absolute guess for me who/what exactly Kotoku is, is it the bird, or the orb or another character altogether? All I know is that it wasn’t made clear enough to me in the play so I struggle to think that a younger audience member would either. But then again it could be because I’m an adult using too much logic?

My only critique would be that at times some scenes stretched on for a little too long for me, so I can only imagine how hard it might be for its targeted younger audience to remain engaged.

That being said, I think that to a degree, the mysterious nature of Kotoku and the Moon Children keeps you hanging on the edge of your seat in suspense. It’s an absolute gem of a family friendly fringe show that anyone is sure to love! 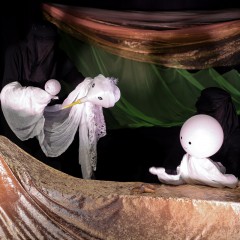 Kotoku and The Moon Child

A puppet show hailing from New Zealand, aimed at children and adults alike, this production was like nothing I'd ever seen.