Far more than an evening of monologues on the topic of autism, Stealth Aspies self-titled show educates, entertains and inspires.

I usually consider myself fairly well informed on the subject of autism and aspergers. Soon in to ‘Stealth Aspies’ I realised there were many things as a ‘neurotypical’ that I had never considered. We were introduced by multiple monologues; personal, sometimes anonymous accounts collected for the show, to people with autism, performed by Stealth Aspies four members.

We first meet Paul Wady, whose simplistic reading style is wonderful to listen to. He narrates his chosen monologues with seemingly effortless subtlety. I found his explanations of masking really interesting, particularly when considering his apparently relaxed stage presence.

Janine Booth’s poetry is beautifully ranted. She exudes a comforting air of calm whilst simultaneously berating the care system and questioning normality with lyrical ease. Her poem ‘Being Normal’, with its accurate depiction of feeling different when faced with the status quo of daily life, had me close to unexpected tears.

In Alain English, Stealth Aspies have a skilled orator. His chosen monologues are performed with talented storytelling ability. I found his poem ‘Fall Forward’ inspirational and uplifting, a modern day ‘Choose Life’ of Trainspotting fame; this analogy perhaps supported somewhat by English’s Scottish accent. His namesake vs. nationality being something he acknowledges early on with dry wit.

Hannah Yahya Hassan is a superb actor, and I was taken aback by how believable her re-telling of monologues could be. She fully absorbs herself in each monologue character, most particularly when recalling a painful story of sexual assault. I was shocked by the statistics provided on this subject regarding women with autism, and saddened that I had never considered the complications of societal presumption when dealing with an inappropriate interaction.

My only criticism of the production is of the presence of a microphone. In an intimate space at times it became obscuring and even distracting, and with such accomplished projection from all four performers it was far from necessary.

This was not only an exploration into what it is like to live with autism, but a study into neuro-typicism, a lesson in taking things for granted, and a from-the-roof-tops-shout to be more aware, more knowledgeable, and more kind. Stealth Aspies defies every negative autism stereotype with grace, humour, and kick-ass confidence. 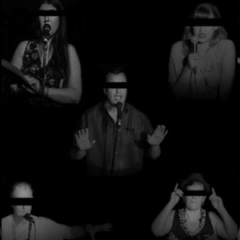 Far more than an evening of monologues on the topic of autism, Stealth Aspies self-titled show educates, entertains and inspires.