Encee Cripps and Sam Cartwright’s one-woman show introduces us to care home worker Gem, alongside a cast of comedic clients. All characters are delivered by Cripps; the best being the protagonist.

Cripps’ down to earth stage presence as Gem is so comfortable and endearing, she had a chilly straight-out-of-work Thursday night audience in fits of easy laughter within minutes. Her portrayal of Gem hit accurately home the inevitable struggles, dilemmas, and necessary dark humour of working in the care industry. Gem’s story is relatable and moving, and Cripps’ performance is scattered with witty asides and skilled soliloquies.

I found the other characters less believable, and unfortunately as a result I felt I lost some of the intended softer side of the story. Although impressively all played by one actor, these secondary characters seemed all a little too alike, and blurred somewhat into one. I appreciate this is a fairly new production, and it would be interesting to see if these characters took better shape further down the line.

Another reservation of mine was the confusing sound effects. I found the use of naturalistic sounds such as doors closing and cats meowing distracting and incongruous, because the rest of the piece was fairly stylised, so these additions seemed unnecessary. This was a problem throughout in consideration of genre. Although the show description promised an impressive list of art forms, I noticed only one example of puppetry and nothing I would describe as clowning. However, it is worth noting these were minor disappointments based on a slightly misleading brochure entry, and not a detriment to the performance overall.

Even in a cast of many played by one, the star still has to be the writing. It was refreshing to see such thoughtfully written and well-landed jokes, many of which put me in mind of British sit-com favourites, and plenty of which made me laugh out loud, along with the rest of the packed out audience.

Whilst praising the writing it seems only correct to applaud the title. ‘The Art of Caring’ so aptly captures both the passion and skill of those who work with vulnerable people, and I truly welcomed seeing this celebrated from such a fresh, young angle. It was pertinent that Encee Cripps took more than a moment at the close of the show to communicate how much this meant to them, due to both Cartwright and Cripps’ personal connection to the industry. Big heart, big laughs, and for a Little Bit of Theatre they have big potential. 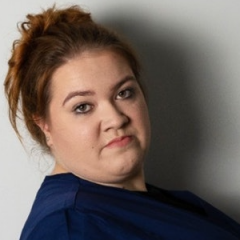 The Art of Caring