On the 27th March 2019 we went to the Direct Art Action in Sutton Coldfield. We saw different arts and paintings in the gallery, like some of the art was pretty and then some was funky and then the other arts that we saw was kind of dark. We also saw a lot of Disney art like Elsa, Mickey Mouse and Felix the cat.  There was painting, 3D, photography/photoshop, drawing with pencil and lots more.

We met one the curator who is the man who organised the gallery and he told us why he chose art and then after told us about the school and college he went to. We also had to pick two pieces of art that we liked and then had to do an analysis on them, the one I chose was Felix the cat from the Disney set which was a painting and I did an analysis of Mrs Vere’s work as well, which was using photoshop.

There was a broom where the brush was multi colour and it had been driped in paint and dragged along so the paint looked very colourful and beautiful, and then there was some Disney theme art that looked cool and was created with paint. They was a the photography of Mrs Vere`s where they were three men a few meters behind each other, the background looked like it was somewhere in the forest.

I haven’t seen much art because I don’t really go to art galleries so I was not expecting to see the Disney and the Japanese theme painting there. I was very shocked and happy to see them because I am a Disney fan and I like the Japanese style.

I think the art gallery was good because we see many different arts that were cool and amazing and we also saw another teacher’s work that used to come to come to our school. There was also some work from people at the college and we spoke to someone who used to be a student at our school.

To be honest there wasn’t any art that I didn’t like, all of the art I saw was cool and amazing.

For some artists it takes them a long time to set something up that they may have painted so this is a good place to share their work.

The idea I will take with me is I will try and use acrylic paint to try recreate some of the Disney painting but with different character instead of the ones that we saw. 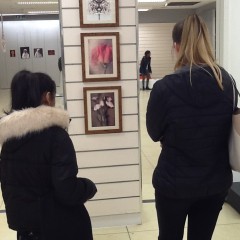