This was my first trip of 2019 to The Warren, which each year seems to befit its namesake more accurately. This year it boasts a total of seven stages, some which are trickier to find than others. No frills and intimate, The Nest is the setting for Eleanor Dillon-Reams’ debut solo show, HoneyBee.

The Glasto-vibe nostalgia so well emulated by the environment is doubled by Eleanor Dillon-Reams’ energetic, glitter-bomb first burst onto the stage. Audible punters outside the small theatre add to the festival setting she invites us to envisage, and within minutes we’re consumed into Kate’s story.

The show skips between genres throughout; movement, spoken word, and character acting are framed by interludes of very capable stand-up. At first this seems a little disjointed, and I wandered if Dillon-Reams had tried to wedge too much into one short show, but as the story unfolded I felt this was all part of it. The erratic, slightly manic changes not allowing us to settle very much mirror the message of our host.

For the most part Kate’s story is one of many. Reaching your late twenties and thinking you should probably have it all sorted out by now, drinking, drug-use and random sexual encounters crossed with dancing until you cry with the best mates you can imagine. However there is also a much darker, unexpected turn in this well-worded story, which adds another layer to the performance. Dillon-Reams’ acting skills and ability to change character with such clarity ensure no part of the complex plot is missed.

Dillon-Reams’ audience interaction is impressive. She instils such confidence in a small audience with her friendly asides, and should be praised indefinitely for her accomplished admonishment of an (I’m horrified to say, more than one) awkward audience mobile phone moment. Not only this, but she dealt with a few minor lighting blips with total grace.

One part of the show did not work for me, and to avoid spoilers I won’t go into much detail. However, a certain focus on audience interaction towards the end of the piece actually distracted me too much from what I was watching; it was a little clunky practically and I found myself taken away from the production for a few minutes. This was unfortunate, as I realise the opposite had been intended, it was designed to be more inclusive.

Dillon-Reams clear passion for her production shone through, and towards the close of the show it became very obvious how much it meant to her. I felt her ability to so openly show her gratitude to her audience was brave and touching. HoneyBee she is; Eleanor Dillon-Reams is endearing, committed, and one to watch out for. 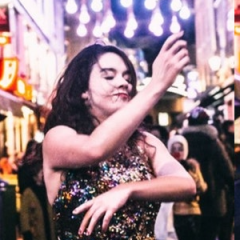