The dark and moody space of the Rialto Theatre is the perfect setting for this black comedy about the second outbreak of the black death. Unlike the first in the 1300s, this outbreak was largely contained to London, although it wiped out nearly a third of the city’s population as the rich fled and the alchemists scrambled to find something to stop the disease.

The play focuses on four characters – three prisoners and their jailer (gaoler) – as they ruminate on life, and more pressingly, how long it will be until the black death hits the prison. It opens with Matthias Richards (played by Liam Murray Scott) scrawling equations and potion recipes on the wall as he attempts to work out how to cure the plague. All too soon though, his space is invaded by Jennet Flyte, a young girl jailed for stealing. Char Brockes, who plays Flyte, delivers a formidable, multilayered performance, transitioning from scared and precious, to comforting, to hopeful. She is quickly followed by Hannah Jeakes, played by Sorcha Brookes, who was equally captivating.

Just before the play starts its approximately 85 minute run-time, writer Christine Foster took to the stage to announce that due to unforeseen circumstances, an actor had to leave production last minute and director/producer Margot Jobbins would be taking on the role as the kindly Gaoler Holt. She had only had a few days of rehearsal and was still reading from the script. Given that she had been thrust into the role last minute, Jobbins was exceptional. She was flustered at the beginning, as she lost her place on the script, but later scenes were smooth, and she managed to evoke real emotion with some of her delivery. It also allowed for some gender-swapping in the script, which got a cheer from the audience.

Nerves similarly afflicted the other performers at the start, with some fumbling of lines and delivery that was slightly jolted. But, much like Jobbins, the cast quickly settled and the jarring opening was quickly forgotten. Instead, we are swept up by the ingenious wit of the script.

It's not innocence that keeps a body out of prison... it's influence.

There is a surprising amount of heart in this play, given the subject matter. Reprobates and debtors share in their camaraderie over the fear of the plague as it takes lives in the thousands. Humour is deployed expertly to cover – ever so barely – the themes that really underpin this play: family, belonging and religion. The cast admirably balance humour and emotion, causing people to laugh and cry throughout the performance.

Four Thieves Vinegar begins slow, but once it gets going, you are grateful to be along for the ride. An amazing script, fantastic performances, great set and costume design – this show is a must watch.

Tickets and more information can be found from the Brighton Fringe website. 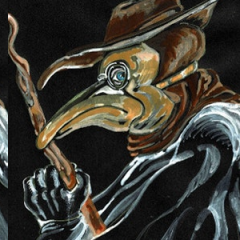