Inspired by the pacific trash vortex, this show for ages 3+ is a good introduction to the perils of persistent plastic pervasion

The world is finally waking up to the issue of single-use plastic, but how do you communicate the complexities of the issue to children and toddlers? Todos Teatro (English: Everyone’s Theatre) has the answer.

Turtles Don’t Like Plastic is a mix of theatre, clowning and puppetry that will bring joy to children and parents alike. Its imagination is charming, and the puppets are great. Despite perhaps being the most simplistically designed, I really enjoyed the seagull puppetry. It’s evident that everyone involved in the show is passionate, both about the craft and the environment.

I’m going to be honest: I, personally, wasn’t the biggest fan of the show. It felt a little bit too abstract and ethereal for me – and maybe I just lacked the imagination required, but I sometimes got a bit lost. However, I acknowledge that this show isn’t primarily aimed at me, so I spent my time observing the children in the audience to gauge how they were responding, and it was fascinating and heart-warming to watch their reactions.

The decision to start the show with bubbles was a great idea. It immediately had the children excited and engaged. Suddenly, the show takes a dark turn as our friendly turtle gets caught in a storm and washed up on an island of plastic. It was a surprisingly traumatic scene, with more than one child crying or turning to hide their eyes.

The turtle is rescued by a mysterious creature who loves plastic and hordes it all. Slowly but surely, they work together to change their environment. The audience isn't ignored, and the duo do well to keep the children engaged without direct audience participation, especially considering that children are, it must be said, the toughest of critics.

While doing background for this review, I came across this tweet. It's only one example, but even if one child becomes more aware of the dangers of plastic and decides to make a difference, does that not suggest the show is successful?

If you have children, you really should take them to see this show. At 45 minutes long, it’s just the right amount of time to ensure they don’t get bored. Todos Teatro also do relaxed viewings, and if you’re really lucky you might get a picture with the puppets after! 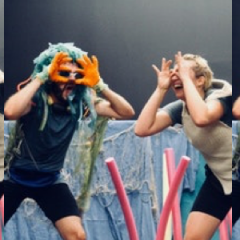 Inspired by the pacific trash vortex, this show for ages 3+ is a good introduction to the perils of persistent plastic pervasion