It’s the height of World War II, and the Allies have learned of a Nazi plan to create a mythical monster that would end the world. Unfortunately, their best agent has gone missing, and it is down to three complete losers to try and save the day.

First off, can I just say how nice it was to spend an hour watching a piece about Nazis and being able to laugh (a lot) rather than worry about the state of the world. Given the growth of right-wing extremism, it was almost a bold decision to use such characters, but it definitely worked.

The show produced some real laugh out loud moments, in no small part due to the fantastic theatricality and silliness of the cast and script. It was a mix of both surrealist comedy and sharp one-liners that, largely, meshed together into something highly successful. Easy comparisons could be made to Sleeping Trees or The Mighty Boosh, both of whom deploy comedy in a similar fashion.

The multitude of characters that the trio played were often well defined and easily identifiable through simple yet effective costume tweaks and posture changes. In many ways it is comedy stripped back to the essentials. Props were minimal, sound effects were done manually, and other than a couple of projected images, the stage dressing was a simple black curtain.

This is not to say that Danger Brigade is a perfect show. Some of the jokes were a bit trite, occasionally feeling forced. The plot, although imaginative, was sometimes buried under a subplot that I found to be less compelling and somewhat under-developed. Captain McCoy in particular was guilty of slowing the pace down with his flashbacks and sex obsessed mind. I also found the final act a little bit flabby. The jokes weren’t of the same high quality, and it felt as though the show didn’t know where to end. I think they just need to be more ruthless with the script, and I have faith that this is something they will work on as they grow.

Despite these complaints though, it is easy to see the raw talent that Michael, James and Ed have. Willing to throw themselves completely into the absurdity, they have a bright future ahead of them. 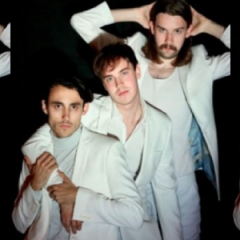