Following on from a week’s Intensive Theatre Workshop at the Sandpit Theatre, St. Albans. A group of enthusiastic young  people ages 7-14 years treated us to the musical, Disney Aladdin JR.

The performance started in an imaginative market stall set in the world of Aladdin. The set was built in two halves using the higher levels to good effect, with onlookers observing the market activity below.

The scene shifted along  with the Diamond in the Rough The Street Rat. (Aladdin).

Aladdin finds himself plotting with the Sultan to find the lamp and steal it. The creepy dramatic music made everything feel dark and mysterious as Aladdin entered the cave to look for the lamp. By a clever use of lighting the scene changed as he entered the cave with a very loud spooky voice making everything creepy and mysterious. Aladdin calls the Genie out and in a cloud of smoke Genie  is released. Aladdin realises there are three very important wishes he can be granted all of which have rules governing their use. The rules are Genie cannot

2) Bring anyone back from dead

3) Can’t make anyone fall in love with anyone else.

When Aladdin realises he can partake of the three wishes he makes a promise to the Genie that he will use the last wish to free Genie from the lamp. (Freedom) A rousing chorus of singing and energetic dance ensues with the ensemble in beautiful red glitter attire. Waving Colourful fans and making a riot of colour all  accompanied  with the Disney song “Never had a friend like me”

Aladdin now transformed to Prince Ali goes back to woo the Princess Jasmine. The tactics he uses to woo Princes Jasmine eventually loses him all friends. The scene changes to an all blue

aura and suddenly the audience is transported along into the stary blue night. Ali appears so regal in his flowing white robes complemented with a royal blue scarf draped around the robe. Prince Ali and Princes Jasmine travelled on the magic carpet taking us the audience to a “Whole new world” This Disney classic  song rang out in perfect harmony with a duet, well done Jake Eveson and Ellie Slade. After the interval Prince Ali has to face the awful dilemma that he is not who he appears to be. The chaos in his own cluttered mind leaves him to question the very core of  his dilemma.

1) Keep the Princess and live a royal life with all the privileges. 0R   tell the truth

2) If he does not keep his word to the Genie there is no freedom from the bondage of the lamp. Against the trend of modern thought he goes and confronts his own dilemma and Tells the Truth .

He has one wish left which he uses to give Genie his freedom. The    Sultan still seeking ultimate power and wealth takes the Genie’s place and is now subject to  the lamps bondage. Princes Jasmine prepares for her wedding to The rough Diamond Aladdin with her father’s approval. The moral of the story:

Be wise- be yourself 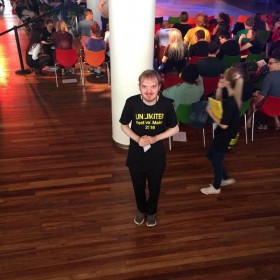 I am a dancer and would like to become a Choreographer. I have completed the Bronze and Silver Arts Awards currently I am working on the Gold. I was a member of Actone ArtsBase/ Silver Birch Dance Company. Recently I finished College studying Performing Arts at the Orpheus Centre, Surrey. 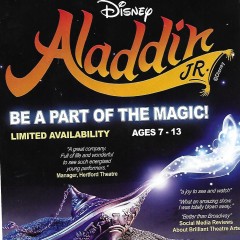 Following on from a week’s Intensive Theatre Workshop at the Sandpit Theatre, St. Albans. A group of enthusiastic young  people ages 7-14 years treated us to the musical, Disney Aladdin JR.

The performance started in an imaginative market stall set in the world of Aladdin. The set was built in two halves using the higher levels to good effect, with onlookers observing the market activity below.