On Tuesday 2nd October 2018, I went to the Cambridge Junction to watch Luca Stricagnoli and his girlfriend Meg Pfeiffer perform.  Luca Stricagnoli showed us his various different guitars, one of which he created himself. It is the only one of its kind in the world.   That guitar has a bass fretboard, a harmonic fretboard and a melodic fretboard; one of the fretboards even goes backwards!

Meg Pfeiffer demonstrated us some songs she has played on the keyboard and guitar.  She is very talented like Luca, so I can see that they are a match made in heaven!  Luca is Italian and Meg is German and when they met, they said they both thought the other was stereotypical Italian and German respectively, whereas they weren’t at all!

I enjoyed listening to Luca play The Showman and them both playing ‘now we are free’. I liked their interesting styles of music.  It’s nothing like I’ve ever experienced before.  They also talked a lot about what it’s like to be on stage and perform which gave me a good insight into life on tour. They told us to expect to spend at least 10 months away from home and to be bored of doing concerts and turn up not wanting to do them.  They also talked about how they could not see us because of the lighting (or lack of). I learnt what it’s like to go on tour and what it’s like being on stage and performing.

I also got to meet them both after the concert and took a photo with them both, they were very friendly.  I wasn’t expecting to see Luca’s girlfriend Meg Pfeiffer and I didn’t know what a fabulous musician she is.  I am glad she performed.

There were too many intervals during the show which made the concert unnecessarily longer.  This means we got home quite late on a school night (around midnight!).  It would be been better if it was structured with just 1 interval.   The thoughts I have taken away from this concert is the possibility of creating my own guitar if I acquire the skills for doing this.  It’s something I am going to mull over the next few years.  I would highly recommend attending Luca Stricagnoli’s concerts as he is an awe inspiring expert on the guitar.  You can learn a lot by watching him. 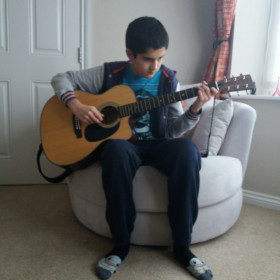 Roan is a guitarist working towards his Gold Arts Award. 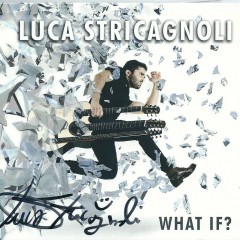