He played some of his own compositions as well as some cover songs.  I was awestruck by the fingerstyle guitar music; he has magic fingers!  I have previously seen Luca Stricagnoli before who performed fingerstyle on the acoustic guitar and I have written a separate review about that one.  I have attended many concerts in the past, some of which I reviewed for my bronze arts award.

At the start of the concert JD Simo did a support act.  He describes himself as a white Chicago boy.  Later on in the concert, JD played blues music with Tommy and I have never heard Tommy play the Blues before.  Tommy and JD together rocked!  I enjoyed the wide range of music Tommy played.  I enjoyed his composition ‘Classical Gas’ I learnt that lots of famous artists play covers of each other’s music.  It makes it very interesting to hear different interpretations of the same music.  I also really liked Tommy’s versions of the Beatles’ “Day Tripper”.  As he is going to be 64 years old on 31/5/19, he played us ‘when I’m 64’!

On another note, my dad was blinded by the sharp lighting effects.  Perhaps to improve the concerts they should not make such sudden changes of lighting intensity.But I was inspired by Tommy’s style of playing and will think about adding more complex fingerpicking to my repertoire.  The highlight of my evening was when I got to meet Tommy after the concert and he signed my CD!  This was a 5Y performance and I highly recommend trying to catch Tommy Emmanuel on tour. 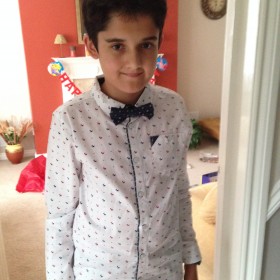 Roan is a guitarist working towards his Silver Arts Award. 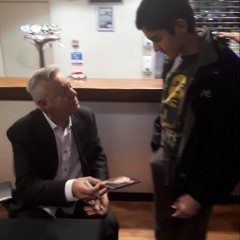