No point burying the lead here, this film is absolutely awful. And not in an endearing, cheesy way. No, this is just bad.

Based off the comics by Mike Mignola, Hellboy (played by David Harbour) is a demon summoned from Hell in a Nazi occult ritual, but was saved by his mentor-cum-father figure Professor Broom (Ian McShane) and now works at the Bureau of Paranormal Research and Defense. He doesn’t seem to enjoy his work, and comes across as whining and belligerent.

In the dark ages an evil queen named Nimue (played by Milla Jovovich) was about to overthrow humanity, until King Arthur (yes, that one) dismembered her and scattered her body parts across the UK so they may never be rejoined. Jump forward to today and the parts are being reunited by the pig fairy Gruagach (Stephen Graham) who bears a grudge against our eponymous hero. Reluctantly joined by Major Ben Daimio (Daniel Dae Kim) and old friend and psychic Alice (Sacha Lane), Hellboy must stop the Queen before she wipes out humanity with a plague. A standard affair really.

This overarching plot is accompanied by the question of how, indeed if, Hellboy fits into this human world, and whether he should be seeking to reach out to the demons rather than just mindlessly killing them, but it explores this in such a lazy way there it really shouldn’t have bothered. None of the demons are anything other than spiteful murderers, and do nothing to garner sympathy, and this is especially true of Hellboy himself. He constantly moans about how humans will never accept him, but he is so easy to hate it’s not surprising. While he was initially distraught at the death of his partner, it only took a brief speech for him to be raging against humanity. He flip flops without any conviction, and rather than be invested in his journey of identity, you just want to see him get stabbed again.

And it’s not just Hellboy’s character that suffers from poor writing. All the characters are particularly unlikable, delivering horrendous lines and ‘one-liners’ that would be embarrassing in a primary school production. Dropping the f-bomb continuously doesn’t make for comedy, but it as close as this film got.

The pacing was all wrong as well, jumping from point to point without ever taking the time to establish or conclude them. Nobody really reacts or emotes to anything happening around them, shrugging it off with a blase attitude that reduces the already low investment the audience had. No clearer was this evident that the anticlimax that was the end of this film. I’m going to spoil it for you because you shouldn’t see this film: the evil blood Queen, who had the means to destroy humanity, was defeated by Hellboy deciding *not* to wield a sword. That was it.

Not even the sound and visuals - the bare necessities for film - felt right. The CGI looked cheap and half-finished, especially with the hellscape scenes. The sound was altogether more strange. I couldn’t quite place what was wrong, but I think it comes down to mixing. It felt as though the dialogue had been dubbed over, sounding bizarrely loud in places, but then inaudible in others. The music choices tried to inject a sense of risk and excitement that simply wasn’t there, and as a result felt out of place. The practical make-up and effects were, on the whole, impressive, but not redeemable.

This film reboots the franchise from Guillermo del Toro’s run in 2004 and in 2006 with the sequel Hellboy II: The Golden Army. While both were flawed films in their own way, they managed to give us a witty and sympathetic Hellboy (played by the excellent Ron Perlman), who had buckets of humour and charisma. While del Toro’s Hellboy universe was strange and charming, this was bland, boring, and unexplored - a real waste.

At every opportunity, Hellboy chose the safe path, and in doing so consigned it to the pile of forgettable comic book movies that simply can’t compete. The film heavily teased a sequel, but I wouldn’t get too invested in that idea. If I were you, I wouldn’t even watch this. 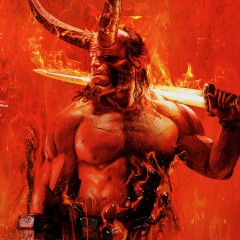