“There is always more misery among the lower classes than there is humanity in the higher.” - Victor Hugo, Les Misérables

Almost everyone’s heard of ‘Les Misérables’, whether it’s from the original piece of literature written by Victor Hugo in 1862, Boublil and Schönberg’s musical stage version, the 2012 Hollywood film version (directed by Tom Hooper), or the new 6-part BBC series that aired at the beginning of this year (directed by Tom Shankland); it is a tale renowned throughout the world. Set in 1815 through to 1832 in Paris, France, the story is one of hope, love, passion and vindication, with a political message about how the decisions of the higher classes cause the misery of the lower. It is loved by millions with nearly all shows selling out, so I was extremely lucky to get the incredible opportunity to watch a dress rehearsal of the Cameron Mackintosh touring version of Boublil and Schönberg’s Les Misérables at Birmingham Hippodrome on 2nd March 2019.

The most prominent themes throughout are those of social class, political beliefs, and good and bad, all of which were highlighted through every element of this production, but one theme that had notable strength that I hadn’t taken much notice of before, was the idea of unity and camaraderie. It was illustrated through the ensemble work, choreography and blocking (where each actor is at each moment), especially during the marching scene with everyone moving together with purpose and passion. The simple moments like this I found extremely uplifting, despite the constant reminders of hardship.

The set was also brilliant. With enormous panels sliding in or flying down and with nearly all pieces of set being automated, all transitions were extremely slick. Because of the extent of the set, you were really transported into the setting, but it also worked to create contrast when there was little to no set on stage for some of the particularly sensitive scenes. This sensitivity and control over the emotional scenes was one of the highlights for me, because the bigger, higher budget performances like ‘Les Mis’ – with huge set and enormous venues – can risk losing the true feeling, but not here. The emotions were raw and heart-wrenching. I was extremely glad of this because there is so much compassion and emotion written into the story and the characters that it is really essential for it to be shown. Also, in order to convey the aforementioned themes and portray how the class differences and politics affected the characters, these moments needed to be paramount, and they were.

The mood throughout was mainly controlled by the lighting, or the lack of it. Very often, the people were lit dimly but from all angles so they were completely visible, but everything still felt ‘dark’. When there was more of an idea of hope, the lights would be brighter and when someone died, bright white pin lights were flashed directly on the character, adding poignancy to each death, but leaving much of the stage black. It also highlighted just how many deaths there were. The power of these moments brought me and most of the others to tears and we sobbed to the surround-sound gunshot fire sound effects. The music also helped lift these moments and encapsulate the audience along with the stunning singing and the perceptive, but lucid acting from all actors – including the children.

With the added bonus of the brilliant venue and the kind people there, my overall experience was absolutely astonishing. ‘Les Misérables’ is now officially at the top of my ‘Best Theatre Shows’ list! 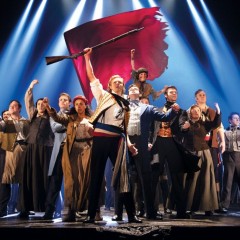 “There is always more misery among the lower classes than there is humanity in the higher.” - Victor Hugo, Les Misérables