It would be an understatement to say that the DC has had a challenging few years in live action film. Man of Steel was derided for being too gloomy, Batman v Superman was an absolute train wreck, and Justice League was such a hatchet job that it very likely killed any hopes of a cinematic universe to rival Marvel. Wonder Woman and Aquaman - far and away DC’s biggest successes - succeed precisely because they aren’t trying to do anything other than tell a story, and allow the characters to just have fun. It’s just as well that DC learned that lesson, because Shazam! would have failed if they stuck to formula.

15-year-old Billy Batson (Asher Angel) bounces from foster home to foster home, getting into trouble with the law along the way. He is insular, and rejects the notion of family while simultaneously seeking his mother who he got separated from as a child. Then while on the subway he is transported to the lair of a wizard who grants him the ability to transfer into an adult superhero just by saying “shazam”.

“Say my name so that my powers may flow through you”

In a flash of lightning, Billy Batson becomes the handsome, chiseled, half-cape wearing hero played by Zachary Levi. Despite his newfound power, Billy is still a 15-year-old child, and what we witness is the ultimate wish-fulfilment for anyone who has previously felt powerless.

Both Levi and Angel deserve unbridled praise for their performances. Angel was perfect as the brooding wayward teenager who is resistant to making family connections. Levi, meanwhile, provided the balance to that, and perfectly captured the behaviour and mannerisms of an excited 15-year-old, one who is finally free to just be a kid. His carefree, juvenile behaviour is exactly what one would expect from a kid who’s been granted super powers, and it was heartwarming to see Batson actually have fun - even if it’s as a 6’2 superhero.

Although tonally very different from previous DCEU films, this is definitely part of the same world. There are numerous mentions of Batman, Superman and others from the Justice League, and none were too subtle. But, rather than trying to force world-building on us, the film shows us these characters through the idolising eyes of the young people who have grown up with actual heroes in their lives. Rather than heroes burdened with decision making, they are actual inspirations and social icons - complete with authenticated bullet casings and toys in-store.

Power is a crucial theme for Shazam!, and no clearer is that present than in the antagonist of the film, Doctor Sivana (Mark Strong). The film has a cold opening which gives us the traumatic childhood of Sivana, and explains clearly his motivations and desires. It is somewhat cliche that the film works to juxtapose Batson and Sivana, but equally I understand why they chose that route, emphasising the feelings of helplessness, and how people react to that.

Learning their lesson from the 90 minute mandated runtime for Justice League, DC allowed Shazam! to run for 132 minutes, which was both to its benefit and detriment. Its length allowed viewers plenty of time to grow attached and sympathetic to the characters, and really develop the relationships between Billy and the family he’s thrust into. We got time to actually see Billy enjoying his powers, and coming to the realisation - in Spider-man fashion - that with power comes responsibility. It was a runtime that wasn’t begrudged, as the film was genuinely funny and surprisingly emotional given its silly pretence.

However, the film was certainly flabby in places. Some of the gags felt trite, some of what I assume were meant to be emotional moments felt void of impact. The final fight scene was particularly over-extended, with continual peaks and troughs that sapped the film of both pace and definitely outstayed its welcome. The CGI, especially the early flying scenes, also looked quite questionable in places, but it didn’t particularly detract from the experience.

Shazam! at its core is a family film with a family-centric message. I watched this in a nearly full cinema and people of all ages were laughing and having a great time watching it. The couple dark moments were all the more impactful for the jovial and lighthearted tone the film adopted, and Levi’s puppy dog performance sold me on the character completely. 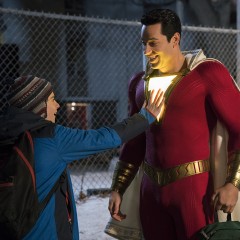