At face value, the premise of Us is pretty simple. The Wilson family are on holiday in the beautiful city of Santa Cruz, California. Interrupting this ostensibly iconic paradise is the appearance of the family's homicidal warped dopplegangers, the Tethered, clad in all-red.

From the Shining-esque title card, to the emphasis on atmosphere - Us feels classic, but fresh at the same time. What makes this film stand out most is the way in which it focuses on holistic atmospheric horror over immediate and sudden shocks. This is done through various methods, Michael Abels’ soundtrack and score managed to make so many beloved songs scary, especially with the mixing and editing controlling your moods. A further part of this holistic horror and tension is the expert use of colour to define the tone of particular scenes. The film also using darkness masterfully without entirely depending on it, leaving many of the daytime scenes still feeling intensely frightening.

At the same time, Mike Gioulakis also plays around with visual perspective, with many of the shots forcing the viewer to feel trapped and starkly heightens the tension. All of this atmospheric and slower build horror serves to also makes the jumpscares and other bigger, louder moments feel far more impactful, simply because of how well they contrast the creeping subtlety of the rest of the film. Everyone was shouting along in my screening! Humour is also used masterfully in Us, deflating the built-up tensions by being genuinely funny, only to hit you with more scares soon after.

Us is a film that lives and dies by its performances, especially those of the family at the centre. Lupita Nyong'o gives two different intense and powerful performances, shifting between maternal panic and cold homicidal obsession and doing an incredible job of both. Beyond those two extremes, there a wide range of subtleties that she has to convey, and she performs them all perfectly. Nyong'o proves once again that she should be leading films, not just supporting them. To be frank, she deserves another Oscar for her work in this film.

Alongside her, Winston Duke then plays the corny (and sort of useless) dad (Gabe Wilson), who is absolutely hilarious throughout the entire film and feels so so human. Shahadi Joseph Wright plays the slightly detached teenage daughter Zora with a performance that's decent, but it’s when she plays her Tethered 'Umbrae’ that's she comes into her own, with an incredibly freaky performance where's she's clearly enjoying herself. The same applies for Evan Walker as the easily distracted younger son, who both provides a lot of the comedy and is equally scary in his own right as his animalistic Tethered - Pluto.

What works best about this family is its relative normality. You're completely sold on their family dynamics throughout, with a swathe of well performed relatable little moments that cement it. This is especially interesting in the context of a genre where black people are rarely presented as being 'ordinary’ or even human, with the idea of the horror staple of an 'ordinary family attacked by monstrous beings’ actually being a black family is almost completely unheard of. Outside of the family, all the performances are great, providing the perfect blend of horror and comedy to fit the tone of this film.

As you might have gathered, Us is unbelievably layered. Whilst Get Out was intensely political in a way that was overt, especially to black viewers, Us is far more wide ranging and subtle in its commentary and ideas, going beyond race and more broadly into ideas around identity, class and the Other (amongst other things). At the same time, the film never forgets that this is from the perspective of a black family, and many of its other ideas interact with that in interesting ways.

As a whole, Us is a masterfully complex film, which wonderfully weaves together humour and horror to create an amazingly frightful experience. 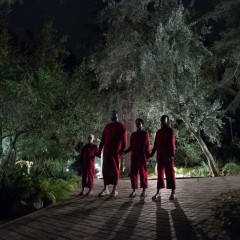