Voice MagArts AwardReviewsHamilton: Worth the…

A story from the 1700's that's still relevant today

For those that haven’t yet heard about Hamilton, a word of warning: on paper it sounds a bit...mad. Hamilton is a musical (written by Lin Manuel Miranda) telling the story of Alexander Hamilton, America’s ‘forgotten’ founding father, told in rap and hip-hop. Believe me, it works!

Before I get into this review, however, it might be best to admit that I’m a huge fan of the show and been lucky enough to have recently seen it at the Victoria Palace Theatre for the second time. As someone with an interest in history and a love for theatre, of course I’d love it. What’s surprising is the wide audience that it attracts: My mum, for example, is not particularly interested in either history or rap music but by the interval found herself to be absorbed in the story, as was the man sat beside me who seemed slightly stunned by what he had witnessed, admitting that he was glad to have read the synopsis beforehand.

The modern language that is used throughout allows a contemporary audience to connect with characters who lived in a very different time, and places emphasis on the things that have perhaps changed less than we’d thought, for example Alexander’s race/immigrant status is highlighted throughout.

But as pointed out by my neighbour, some prior knowledge of American History is certainly useful. As it was written for a mostly American audience, there are references to specific battles or people that are not widely known in this country, and I did notice some small script changes to that of the recorded version, making certain facts clearer, eg. the location of the penultimate scene.

That being said, I don’t think any of the people around me minded much about understanding the ins-and-outs of the American political system because of how charismatic and endearing the characters were - Lin Manuel Miranda’s witty yet heartfelt writing really brought these historical figures to life in a way no text book ever has. The way even self-proclaimed ‘villains’ such as Burr can still be sympathised with strikes home the point that these were real people who did good and bad things, the ‘hero’, Hamilton, included in that as much as anyone.

At the interval, the stage manager announced that Rachelle Ann Go would be replaced by Sharon Rose as Eliza due to illness. This unprecedented change was well-handled, and both gave fantastic performances. There were no hindrances to the rest of the show, and it was interesting to see how the same character could be presented differently.

When it came to production design, it was difficult to distinguish any one element that stood out more than the other, a credit to how well set, lights and costume all coordinated. The set, a mix of brick and wood with a rugged, semi-industrial feel, had a walkway around the top of the stage, with sections that were moved by the ensemble. There were also concentric turntables on the floor that were used to move set, and in highly effective movement pieces.

Interested in history or not, Hamilton’s story is sure it stick in your mind for a while. 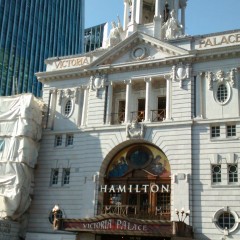 Hamilton: Worth the hype?

A story from the 1700's that's still relevant today