Great use of props combined with an unpolished style of acting make this show an entertaining and no-holds-barred view of the problems facing the NHS at a time when it is vastly overlooked.

On entering the theatre the set for Pipeline's 'Drip Drip Drip' is underwhelming. No flashy backgrounds or elaborate lighting, and scene changes don't go as smoothly which even the actors admit in the post-show Q and A. But that is precisely what I liked about this show. Both the set and the acting had an unpolished and raw feel to it that depicted the subject matter perfectly. The NHS is an imperfectly perfect beast, that runs on real people and a passion for helping others, just as this small Cornish theatre company is.

The company call this piece their 'love letter to the NHS', yet it is so much more than this. It tackles the often taboo subjects of the failing NHS, racism and the rise of far-right ideology with a dark and sarcastic wit that gets the audience laughing along all the way, especially to the bits they aren't sure they should be laughing at. It helps break down the barriers around these topics and in the Q and A afterwards invites feedback of all forms, acknowledging how close to the bone some of their themes will cut for the audience.

The show follows (Former) Professor David Jeffs who finds himself in the hospital alone, confused and convinced he is lecturing on his favourite man, the Nazi scientist  Karl Brandt. With the use of clever character and scene changes they weave a story of a racist man forced to face his prejudices as he is cared for by the very people he hates purely because of their skin. One of the most convincing aspects of the narrative was Jeff's strength of conviction in his views, reminding me that there are people who truly believe the racism and pure vitriol he spouted. The script was cleverly phrased to tackle these issues whilst also using dark humour and character changes to keep the audience engaged and promote an open dialogue.

However, at times the performance did feel clunky and the beginning of the piece was certainly discombobulating as Jeffs stands at a lectern and delivers a speech, telling you to leave if you were expecting to see a piece of theatre. This makes the audience very unsure of themselves for the first 5 minutes or so of the piece, and this confusion definitely extends throughout the performance. Perhaps this is used as a theatrical device to exemplify Jeff's loss of mental stability throughout the play, and it certainly made me unsure of myself, but I'm not sure this hit quite the right tone for a play whose story line was otherwise strong.

Despite the confusion the method of delivery elicits I found the performance very enjoyable, and it certainly appealed to both my dark sense of humour and moral compass which can be a pretty hard note to hit.The message behind the play was one I fully support and hope will open up a conversation about race that this country desperately needs, and for that I salute Pipeline Theatre for a performance well done. 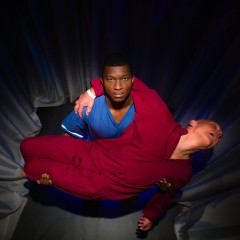