The year is 1995, grunge is in, the Fresh Prince is on the air - and there's an intergalactic war between the (alien races) Kree and the Skrull in which our hero Captain Marvel comes to prominence.

One of the most interesting elements of this film is its setting, whilst every other Marvel film feels ambiguously set somewhat around the time of its release, Captain Marvel is firmly rooted in its time and unafraid to show it. From its music and fashion, to the technology (from which a lot of comedy comes) - this movie utilises its setting perfectly.

Time period aside, this movie very much follows the Marvel formula. It's got a cast that is clearly loving every moment (especially with the dynamic between Brie Larson and Samuel L. Jackson) with light-hearted quips, fun music, great nods to comic books and action that’s solid, but equally isn't anything special. There's a similar story with Ben Davis’ cinematography, it's pretty good but lacks an individuality - except with one specific fight in the third act, where there's a brilliant manic energy to it. In terms of plot, Captain Marvel strays on the predictable side (barring one particularly interesting twist) and also never really leans into the horrible potential that comes with the abilities of the Skrulls. On a technical level this film is the Marvel brand at its best - but elsewhere also shows its limitations.

What definitively sets this film apart from other Marvel movies is that it's the first with a female lead. But beyond just having a female lead Captain Marvel’s feminism reaches through to its core, something undeniably helped by having a female co-director and co-writer (Anna Boden). Action films - especially superhero films - have largely been dominated by men and as such, even those centred around women often fall into a lot of ‘macho’ tropes, often around what is considered to be ‘strength’. This movie completely subverts many of those cliches, creating a strong female character largely without having to borrow from the deep cultural reserves of toxic ideas around (masculine) strength. Her power lies not in her raw ability but in her mental determination and grit. Alongside this, Captain Marvel has several incredible moments of female empowerment, whilst also providing the refreshing uniqueness of a film that doesn’t feel the need to revolve around men - especially not as the typical love interests.

Whilst Captain Marvel’s feminist politics is its strong point, its other political messaging is muddled and contradictory. Throughout this movie, there is relatively overt messaging that is pro-refugee and rallying against imperialism and militaristic societies, yet at the same time the movie is being used to get young women into the US Air Force. On the political front this feels like a movie at war with itself, explicitly calling out indiscriminate air strikes, whilst also lionising the very US Air Force which has committed and commits these acts in the real world - with that just being one example. Outside of the feminism aspects, the film is a mangled mess of American exceptionalism that lacks the self-awareness to deliver.

Ultimately, Captain Marvel is a film that has some really powerful feminist messaging and is an all-round very fun and very Marvel film, likely to be enjoyed by all - even if it did leave a bad taste in my mouth. 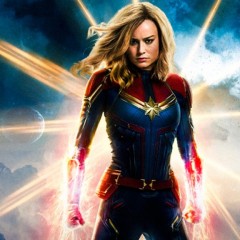