Was this play as punchy as the song?

At 32, Waitress is still here. Endlessly working away as she has been for 17 years. She stoically sweeps the floors, pulls pints and polishes cutlery without too much moaning. It's a career which has taken from her Saturday job in South Africa, to a Marco Pierre-White-esque plush restaurant in Soho to a curry house in Camberwell. It's work that is monotonously repetitive with no satisfaction. It's a job to get the bills paid. Our Waitress (Jessica Sian) relents that she's still doing this at her age; doing a job whereby she could be replaced at any moment. She clearly didn't plan on doing this for so long, but it's the only thing she's ever really stuck to. Is she working on what her higher purpose in life is? Maybe.

She's stuck, and this is a piece that I think is perfect for the VAULT Festival theatre-goer; probably a millennial stuck in a situation is still evolving - seemingly glacially. Generation Rent. The generation with three jobs, no property prospects and no pension or maternity/paternity pay. Maybe there were a few creatives seeing the show in between their own runs, who know exactly what it's like to be an artist and juggling zero hour contracts with their true calling in life. There's a sense of urgency which permeates Work Bitch. Of course I am sure the person reading this has worked in retail or hospitality and knows how urgent everything is. This is probably because the shift is short-staffed, which means the current staff on duty are loaded with the work of four.

The only downside of this piece is that there is too much going on. The show covers many towns and cities and a plethora of characters. The audience are often left a bit in the dark as to where we are now (location and time wise) and why these people matter at this point in the plot. This is mainly due to the confessional charm of the piece, which is indeed charming and fills the story with plenty of emotion and colour. However, it's a bit confusing. I often wonder why at times we are introduced to characters in so much depth, for them to quickly disappear and serve no further function. For an hour long show, I think the content needs to be cut down a lot more to allow reflection and to reign in on the key takeaways (pun intended) of the piece, rather than an hour long piece about one's whole thirty-two years of existence.

How much does our work shape our true self? Overall, with a bit of development, Work Bitch would be an excellent answer to the former. 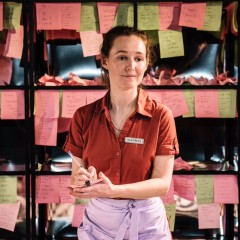 Was this play as punchy as the song?