Let me just start by saying I am not a fan of dance-so I came in at the deep end here. This was utterly out of my comfort zone-and really, isn’t that what Voice Outreach is for? So…

The curtains parted to reveal an ominous row of smoking stacks. An ocean of rustling plastic billowed gently around a distraught female figure. Saving the world, so far so good.

I’m a stickler for details. If I watch a film set in Britain and a raccoon starts trotting along nonchalantly, I find it impossible to not hate the rest of the film. The performer made this ‘shwoom’ noise (I’m sorry, I don’t know how else to explain this) with her mouth every time she moved her arms. To my horror, others began emerging from the gloom and doing the same thing, throughout. It might not seem like a big thing, but I couldn’t get rid of the image of a kid doing an impression of Superman and ‘shwooming’ around the room, and struggled to take the whole thing seriously.

The performance resisted a clear narrative, instead unfurling as a twisting kaleidoscope of visual short-stories that each told something different. I’d be lying if I said my brain had no problem with this and didn’t insist on trying to impose a narrative where there wasn’t one, but some stories were too strong to resist.

Female oppression was tackled in a number of pieces whose clear aim to shock induced heartfelt disgust, for several behaviours that can too often be taken for granted. They started gentle, with a row of women trapped under a film of plastic, dressed out like life-size robot Barbie-dolls. Their pointedly eerie expressions and the subsequent casual sizing-up and ‘handling’ by the men that followed brought a mirror to the way that society often treats the female body. This piece flowed nicely into a set where one human-doll was paraded around like an ornament, still wearing that creepy expression. Fitted out as a housewife, and inevitably outmoded by a younger model, she was similarly picked up by our dashing male protagonist like a toaster from Argos.

This same male symbol came to deliver a monologue, introducing another performer who dressed all in black and became his shadow. What followed was visually fantastic, she proceeded to mirror his every move as he leapt and twisted across the stage, but her parallel movements remained stitched to the floor, tied by partnership and her low status (as he helpfully pointed out). I thought the idea behind this was brilliantly imaginative, and the arrogance portrayed in the actors voice and defiance of his shadow to smash through her glass ceiling were the highlight of the performance. Another piece which really stuck with me was a brutal rape scene which used violent movement and visceral, animalistic cries mixed of pain and lust to illustrate the ugliness of the act, and how simply it can emerge from such apparently complicated creatures as people.

These scenes aside, I found the majority of the performance disconnected and void of meaning, particularly towards the end where I found my mind drifting elsewhere. I found parts incredibly engaging, but the show as a whole was not one I enjoyed. 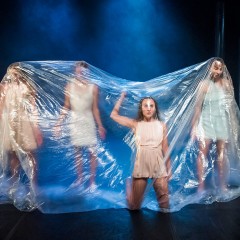