Voice MagReviews(Where in the heck i…

As a self-confessed dis-liker of dance pieces I was trepidatious going into Jasmin Vardimon's 'Medusa'. 90 minutes of dance with no interval for drinks is after all a terrifying prospect, but as it came so highly recommended by others I put aside my preconceptions, and I'm very glad I did!

I went into the show expecting some impressive dancing and some kind of storyline about Greek mythology, and although the only reference to Medusa I saw was a momentary appearance at the end of the play, I was blown away by the incredible use of choreography, music and props, as well as the incredibly hard-hitting themes the performance portrayed.

The curtain rises to a sea of plastic sheeting and a woman dancing through it, seemingly dismayed at the pollution she witnesses. The combination of movement, music and plastic work really effectively together here to highlight the plastic pollution facing our seas, and for an environmentalist like me a strong opening scene definitely helped grab my attention and set the theme of the piece. Or so I thought....

Having supposedly worked out the environmental theme behind the play, I have to say that I found the next 20 minutes quite confusing. The dancers go from scenes of plastic pollution to female oppression to human nature conflict and back, leaving me and other members of the audience rather bemused. The dancing I was watching was incredible, the scenes hard-hitting and the music complimenting it all perfectly, but what exactly was the theme meant to be? And where did Medusa fit into all this?

These questions haunted me for the first 30 minutes of the play as I struggled to see the thread pulling the dance sequences together, but as I became increasingly frustrated at the lack of clarity I made a conscious decision to let go of my need to understand. Instead I simply sat back in wonder at the fantastic dancing before me, and I was far better off for it.

There were many scenes in Medusa that really struck me, but one in particular included 4 female dancers acting as dolls behind plastic sheeting, their movements and poise so well-done that it was easy to forget they were in fact human. They stood silent and smiling in front of the men who poked and prodded them as you would slabs of meat, even undressing and changing them with a few flashes of nudity (shock horror!). Yet it was when the men left that the dolls came to life, performing clockwork dances powerful in both their execution and message. Whether this was a comment on the growing sex doll industry, female oppression in general or just Vardimon playing around with gender roles, I found this an interesting and worthwhile take on the objectification of women.

I won't pretend to have understood what the performance was actually about, how Medusa fit into it or even what the storyline was, but it was a veritable smorgasbord of social and political issues that made fantastic watching and for that reason I urge everyone to see it. It won't make easy viewing and you may leave the theatre more confused than when you entered, but this is the kind of performance you can't get out of your head. 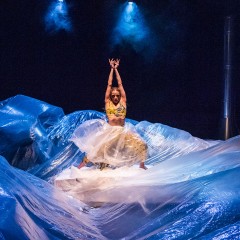 (Where in the heck is) Medusa