It's six days till your wedding and your Maid of Honour has arrived... what could go wrong?

Picture this: it's six days before your wedding. You're hungover on your sofa, playing Mario Kart and trying to force yourself to get round to taking calls from your mum, discuss the bunting and of course manually tea stain over one hundred and five table place cards. This where we find Matt (Finbarr Doyle) and Steph (Katie McCann). But wait for it – Maid of Honour Rachel (Clodagh Mooney) is coming over in five minutes with a secret to change the whole course of the play and the couple's lives. No, she hasn't fixed the bunting problem. Instead she brings another bun in the oven...

Drama is what we don't really characterise with the VAULT Festival, but when we do see it, there's always a secret corker waiting to be spoken about. Tryst is just that. Not soap opera drama either. Sickle Moon's production of 'Tryst' is drama that allows the tension to continue boiling for the whole seventy minutes. You become hooked on every word. It's contemporary, but also not overdone or overdramatised in style. I found it a relief actually and really had no idea what was around the corner.

What I found quite remarkable was how emotionally honest the cast were, particularly Mooney who was locked in a difficult situation for an actor. Her portrayal of Rachel was very truthful, as we saw her stuck in a tight situation with the couple and trying various tactics to try and reshape it. For a trio, there is always the danger that one person is on their own whilst the other two remain as a pair. This power balance is visually striking on stage, especially as the actors remain spontaneous and the relationships twist and turn as quickly as the bombshells do.

As a contemporary Irish play written by Finbarr Doyle and Jeda de Bri, the best part about it is that all three characters are right and wrong at the exact same time. It's a bit like a production of 'A Midsummer Night Dream', in the sense that you never know which part of the trio you side with first. I've seen some productions whereby I'm more attracted to the lovers and others by the musicians. I think it's the same here with Tryst, but of course in a very heightened situation.

It isn't all drama-lama as Doyle's portrayal of Matt is littered with light witticisms to keep the situation more naturalistic. A favourite is, 'I'm not Pinterest, I can't just turn out tat'. McCann supplements these jokes perfectly and at times I'm not sure who is more humorous.

Designer Katie Foley has drawn out a very visually appealing set for the drama to unfold in. Colours are stylishly chosen, yet neutral enough to create a good space for the play to unravel itself. The neutral shades also do not tempt the eyesight of the audience to favour one side or individual more than another, which is good for a play where the power dynamic shifts so quickly.

The only problem with the piece is the ending, which I wondered how they would masterfully bring to a hold. Of course, complex topics such as abortion, sexual politics and loneliness don't guarantee a neatly tied up ending. So what was achieved was definitely passable, but I wonder if with greater development, whether the ending can come to a more cohesive ending. Nonetheless, I thought 'Tryst' showed the crowds that the VAULT is not just for experimental art, but that excellent drama is still in reach. 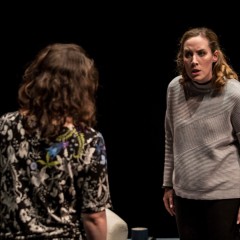 Tryst at the VAULT Festival

It's six days till your wedding and your Maid of Honour has arrived... what could go wrong?