Voice MagReviewsJuliet and Romeo - u…

Lost Dog combine theatre, comedy and dance to twist a Shakespearean classic and make you question whether the poster couple for true love are struggling just as much as the rest of us.

We sit down in a packed theatre on Valentine's Day to watch the ever tragically romantic 'Romeo and Juliet', a story about literature's two greatest lovers who would do anything for love. Except this isn't Shakespeare's classic, this is Lost Dog's 'Juliet and Romeo', and the next 75 minutes are filled instead with tales of mid-life crises, a struggling marriage and a lost couple all set to a soundtrack of 80's tunes....

In Lost Dog's version of the play Juliet wakes up just in time, and with the help of Friar Lawrence the lovers escape to Paris and build a life together. However, the performance finds them in their mid forties with a young child, a struggling marriage and a present haunted by the pressure to be the 'perfect couple'. So (against the warnings of their therapist) they put on a performance about their lives and we, the audience, are invited.

At this point I must confess I struggle to engage with dance performances and this piece was no exception. Although the dance was technically very well performed it struggled to hold my attention and during the dance pieces I often found my mind wandering whilst they made other members of the audience weep. There was one particular dance sequence performed bathed in a red light that I did find powerful, greatly helped by the real connection obviously shared between the performers. This connection I feel really elevated the piece, and during the Q and A after the show the performers were cross-questioned by the incredulous audience as to whether there was anything 'going on' between them. However, the performers are just friends, which although not quite the 'fairy tale' the audience hoped for on Valentine's Day really speaks for the performers talents at drawing us all in to Juliet and Romeo's life and feelings.

Putting the ongoing battle between dance and I to one side, I really enjoyed the rest of the performance. The humour was perfectly timed and had me laughing out loud on many occasions, and the repartee between the performers gave an unscripted feel to the piece, making the everyday life of a middle-aged couple entertaining and enjoyable.

The relationship issues explored in the piece were presented in a funny and relatable way that caused raised eyebrows and knowing nods at partners from everyone in the audience, both young and old! Far from destroying the idea of true love, instead I felt that the performance humanised the all too perfect relationships depicted in fairy tales and the original play.

After seeing Lost Dog's last fantastic performance of 'Paradise Lost (sits unopened beside me)' I had high hopes for this piece, and although it didn't reach the same dizzying heights I still felt it was an impressive performance. I much preferred the solo dances in their last piece, however the realism, humour and repartee that having another performer introduced was really special.

For me this performance was entertaining and relatable, and although I found it dragging in parts it taught me nothing is perfect, not even true love. 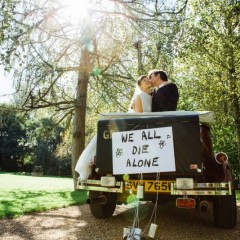 Juliet and Romeo - unhappily ever after?

Lost Dog combine theatre, comedy and dance to twist a Shakespearean classic and make you question whether the poster couple for true love are struggling just as much as the rest of us.