On the 9th of August 2018, I saw Sweeny Todd: The Demon Barber of Fleet Street at Minack Theatre. Minack Theatre is an outdoor theatre in Cornwall and it is built into the cliffs out of rock and it overlooks the sea.

Sweeny Todd was a musical and it was recommended for over 12's. I saw the Matinee Performance by The Barnstormers. Sweeny Todd is about a barber who has returned to London after surviving 15 years in exile. He hopes to find his beautiful wife and daughter, Johanna, but when he finds out what happened to them, he wants to take revenge-especially on the judge who ruined his life in multiple ways.

The play opened with the ensemble singing The Ballad of Sweeny Todd. This song really set the scene of the play which would be extremely dark and gruesome. I thought it was very effective the way the ensemble acted in character when they weren't singing, however when they were singing, they stepped into the role of the narrator and the audience felt like they were in the middle of Victorian London and really knew what was going on. They did this very effectively by using eye contact.

One think I loved about it was that there were so many forms of the arts involved in the performance. The main arts form were acting, dancing and singing but there was also the music, staging designs, costumes and props. When you add this all to a stage by the sea, it creates the perfect afternoon of watching an amazing movie.

I believe that the set designer did an excellent job as they weren't in an inside theatre where there isn't a natural backdrop. They had to battle for the audience's attention as there was a beautiful blue sea behind the actors. Despite this, I felt that I was sucked into Fleet Street with the fabulous but simple stage set.  The set designer made us feel like we were really in Fleet Street by designing a stage set that felt like it was a building. As you can see in the picture, there were stairs up to the barber's shop which made it feel like you were really inside it, despite the fact that there was no walls around it.

I quite liked the costumes as they were traditional Victorian style and each costume reflected the hierarchy which was around in Victorian London. For example, the judge had a smart and clean suit, whereas the beggar lady had a very dirty and scruffy dress.

A scene that really stood out to me was when Anthony went to the asylum to rescue Johanna. This scene stood out to me as they used no props on stage, but instead the ensemble where all dressed in white and had awfully messy hair. They were all doing different actions which made them seem crazy and insane. This really set the scene well without using any props.

As much as I enjoyed it, there is one part that I would change and improve. I felt that for me personally the play ended very bluntly and we didn't find out what happened to some of the characters. In the adaptation that I saw, it ended with the policeman, Anthony, Johanna and the ensemble arriving in the Bakehouse and seeing the horrors that lay inside. However I really wanted to know what happened to Johanna and Anthony. They had talked about getting married but I left the play with some unanswered questions in my head that I really wanted to know the answer to. Did Anthony and Johanna get married? What happened to Tobias?

Throughout the play, an actor that stood out for me was Sarah Trotman who played Mrs Lovett. She played her character really well and gave a lot of energy and thought to her performance. Whenever she sang a song, it was always gave an insight into her character. One of my favourite moments of Mrs Lovett, was when she sang By the Sea because right behind was the sea.

Overall, I loved the performance of Sweeny Todd and I think that Richard Allen did a get job of bringing together 120 actors, musicians, designers and technicians to put on this gruesome tale.

I'm off to buy a pie now, does anyone want to join me? 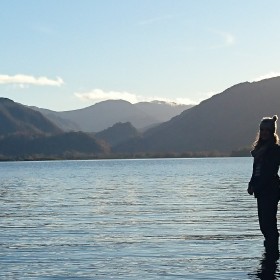 Hi, I'm Georgia and I enjoy the Arts. I have completed my Discover, Bronze, Silver and Gold Arts Award. 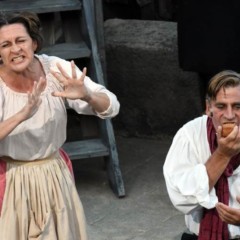