‘Leave it to the Nine!’ Director Polina Kalinina delivers a Blytonesque tale with an adult twist

Any play I've seen where I leave the theatre a) with a massive euphoric smiley feeling or b) the motivation to do more creative things, is always worth seeing.

Written by Matt Parvin and presented by Theatre Tewl, The Noble Nine brings us the story of eight children (and their pet monkey!) who become characters in their grandmother’s illustrious, Enid Blyton-style adventure books. Now reunited adults, who haven’t seen each other in so long (‘when was the last time that we were together’), the piece explores the Peter Pan notion of never growing up while tackling issues of identity.

Emerging director Polina Kalinina, who has also directed at the Southwark Playhouse and RSC rising star Paapa Essiedu in Romeo and Juliet, brilliantly captures the charm of an Enid Blyton novel. Accents are ridiculously exaggerated, fashions are refined yet childishly bold, and the space is well utilised. The stage is made to feel like an alleyway, which creates a wonderful playground-like place for the cast to frolic around freely. There they chant their catchphrase, ‘Leave it to the Nine!’

We’re greeted by Toby Vaughan, a deliciously engaging player throughout the whole piece. He multi-roles between Presenter, Estate Agent and the formidable force that is Estelle. The cast are strong and perfectly caricatured, with each actor really indulging in the quirks of their character during the transition between child- and adulthood. It’s fascinating to see the conflict between the group: ‘Whimsical’ Winnie (Ella Bruccoleri) and ‘Oldest Arthur’ (Ryan Dooey) embody the childhood ideals of the group, while others like the 'now feminine' Bammie and bookish Hen (‘A Barrister!’) have become assured adults. Willy Hudson is a real scene-stealer as Hen; his exaggerated physicality felt like that of a comic book hero.

The most remarkable part is how far we have come since Blyton. I like how Kalinina's direction has kept her contemporary audience in mind throughout the process, allowing us to react to how politically incorrect we were back then. I think this is why the play is so entertaining, because it holds a mirror up to our own nature. We can laugh at the sheer contrast between the play’s nostalgia and our current world: children sipping ginger ale; references to 'the Germans!'; voodoo dolls the children cherish like real sisters. Lines like 'Look what I've found – massive keys!' are not distinctively humorous; but with a balance of surrealism and realism, they become drastically more enjoyable to watch on stage.

What's next for Theatre Tewl? I hope to watch The Noble Nine again, as I think we all need an excuse to escape back to long school holidays, full of feasts and adventure! 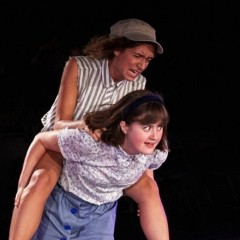 The Noble Nine at VAULT Festival

‘Leave it to the Nine!’ Director Polina Kalinina delivers a Blytonesque tale with an adult twist