Introducing our hostess with the mostess to the stage, Maeve O'Mahony delivers a well-executed, punchy introduction. With her MC, John Gunning, on the decks (who clearly needs vocal training to avoid mumbling ALL of his lines on stage), we were transported from London's VAULT Festival to a WWE-style wrestling ring. The crowd were chanting, the claps ferocious and Maeve marvelled as she cried, in the words of WWE wrestler Chris Jericho, 'Break down the walls!'

At this point, we realise it's not really about Chris Jericho – or the fact that I've watched too many episodes of WWE (especially after claiming I didn't like my brother watching it as a kid, only to watch it an hour later on Plus One), so knew all of the puns – instead, it's about the Palestinian city of Jericho and an anecdote about agricultural farming. Buzzing yet?

This isn't just about WWE. The play itself wrestles with a variety of topics throughout; and I think that's why I left the theatre smiling, but a bit perplexed as to what I just saw. I quite liked how action packed it was at points. There's a real-life battle with an Internet troll 'Soggy biscuit' (involving a wrestling match with a biscuit on-stage), a philosophically motivated Bleep test (because we are constantly running, not to catch up but to stay where we are), some sarcastic colleagues, and the hilarious sound effect of cornflakes. The show doesn't run low on creativity, that's for sure.

I liked it. However, for the broader, non-WWE watching audience, I think there was a bit too much going on within the hour slot. The script lacked focus at times, with O'Mahony trailing off into the distance. While I was engaged by her charisma, and felt like I understood what she was talking about, I couldn't say the same for my fellow audience members... but maybe that's because I was on the front row.

There were also sections of the script that were neither fully explained nor developed. There did seem to be a natural plot, however, with O'Mahony tasked with writing 'Non-Pulitzer' click-bait about WWE for her hits-obsessed journalist boss. In contrast, male colleagues were given topics ranging from female abortion to being an Irish woman. There were arguments with her Mum via text, which occasionally popped up, although I wonder if we were given enough time to understand the full story here.

Overall, this is a fairly mixed review, as I know my fellow audience members also left the theatre smiling, if a bit confused. I was told once that it's better to do one thing really well rather than try and spread yourself thin, which is why I think some of the audience were a bit distracted with the plethora of ideas being wrestled with here. 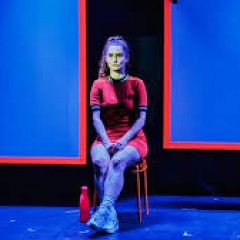