‘If you can’t handle me swipe left’

Laurie Black certainly has a bit of a task on her hands. Branded as a full-scale one-woman musical experience whereby she takes her audience to the moon… well that certainly takes a lot of work to put into one-hour long set. Not to mention the fact that she’s been taking multiple showers to remove her emerald-green alien skin all week.

Performing at nearly 11pm at night, I couldn’t help but get the feeling she was expecting a far boozier crowd to play with and thus make her job a breeze. This crowd (myself included) was on the more sober side and often didn’t recognise the intertextual references, which Black had littered her set with a bit too reliantly. She did give her audience a bit of a pause after each reference, in anticipation that they would cackle in recognition; which felt a bit too forced at times and ruined the flow of the show. She also carried this technique through her musical numbers, which again made the flow a bit unbalanced and dull.

Her songs did carry numerous ideas and thoughts, but it wasn’t long before I noticed that there wasn’t actually any variation of tone, notes or textures within them. Again, maybe if I wasn’t sober that wouldn’t be problematic; but for a ‘Cabaret musical’ I did think it was a bit vapid. It became predictable before we were even halfway through. For someone of her experience, I did expect the performer to adapt to her audience, but that became a bit of a dream as she continued through her rehearsed set. I wonder if a bit more direction could have shifted this approach.

All in all, VAULT Festival is where you find something a little more unconventional, where artists are still learning their craft in a safe space. Give Black a few more projects to experiment with and I wonder what she could do next. 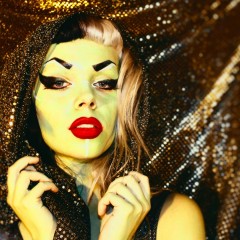 ‘If you can’t handle me swipe left’